Larry Berman: A not so happy 12th anniversary of Berman's Call

I’m quite excited this week to celebrate the 12th anniversary of Berman’s Call and in September, the 20th anniversary of BNN Bloomberg (formerly known as ROBTV). Unfortunately, investors have not had that much to celebrate and the future does not look much better in some respects. Average returns (without fees) for the S&P 500 and for the entire U.S. bond market have been a bit more than half of their long-term 100-year (10.45 per cent, eight per cent) averages over the past 20 years. Historically, the 10-year forward return is only above 12 per cent one-third of the time and almost half the time (46 per cent) it is below eight per cent over the past 100 years. So why has the average return been so low the past 20 years? Valuation! 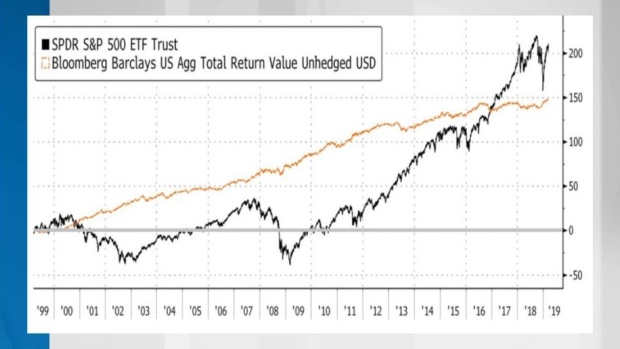 Our first chart shows that equities have only performed better than bonds over the past 20 years. Two massive equity bear markets have been to blame and there is likely another one coming. Bonds have a place in most portfolios despite the fact that most do not like the yield, but the best of higher historic bond returns are in the rearview mirror. The yield to maturity (what we earn factoring in yield and price changes) of the entire world of fixed-income is about 2.5 per cent, and that’s the best we are likely to see. And with equity valuations in the U.S. at long-term extremes, history suggests the next decade (or longer) will offer up a return of about five per cent or less. Over the past 20 years, the average return for U.S. equities (no fees) was 5.83 per cent and for bonds was 4.65 per cent. Looking forward, a traditional 60:40 balanced portfolio will probably average about 3.5 per cent in the U.S. on a nominal basis. It will likely be less in Canada and slightly higher internationally, but not by much. That means that after say, two to three per cent inflation, your money’s purchasing power will not grow much at all. That will significantly hurt most retirement planning scenarios that typically look for closer to seven per cent with a “REAL (after inflation)” return of about four per cent.

In Canada, over the past 12 years, returns hit about three per cent from bonds and 4.77 per cent from equities. Since, 2011, the return on the broad Canadian bond market has been ZERO! 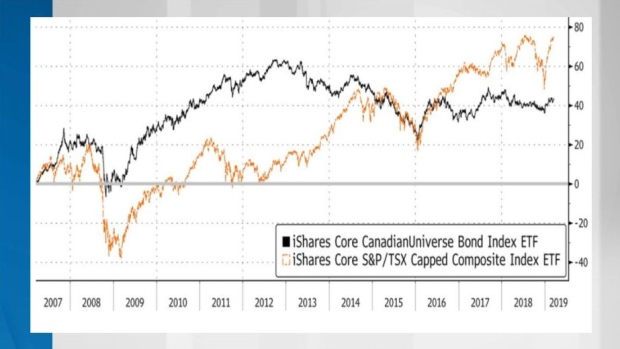 Sadly, we do not see these numbers improving, and while ETFs have made access to passive portfolios extremely easy and at a very low cost, passive portfolios for the next decade or two will not deliver much of a real return and growth to portfolios.

I’ve long advocated to use passive ETFs for active asset allocation. We do this in our sleep-at-night portfolios www.zzzportfolios.com. BMO recently launched three low-cost, (0.18 MER) passive asset allocation portfolios that rebalanced four times per year. These are even better than robo advisors in terms of costs. And while they are a bit too overweight exposure to Canada for my liking, they are great portfolios to improve your passive returns in the future. When you’re bullish, hold ZGRO and when you’re bearish hold ZCON. RBCiShares, Vanguard, and Horizons ETFs have similar ETF portfolios to help investors get a one-stop, low-cost efficient portfolio. We featured the Vanguard version on the show last year. For many, these will be adequate, but won’t change the likelihood that passive returns will surely disappoint in the next 10-20 years.

Learn to sleep at night in a bear market

The previous Investor’s Guide to Thriving tour wrapped up on Dec. 1, 2018. Aptly named “How Long Can a Bull Market Run?” we may have received our answer. Markets posted the worst December since the Great Depression – bringing most of the major indices officially into bear market (-20-per-cent or more) territory. Markets have rebounded in January as they always do after steep declines, but we are likely in the early phases of a bear market where average corrections are closer to 30 per cent and extreme corrections are more than 50 per cent. If this is the case, we haven’t seen the last of market volatility and a downward pattern of lower highs and lower lows. Many people are surprised at this phase because it can take some time for the fallout to move from Wall Street to Main Street – showing up as a recession. Job markets are relatively robust still and central banks are still talking about raising rates. Markets are forward looking and generally anticipate economic downturns, so even as rates continue to rise, employment appears to be strong, and many companies are still posting record earnings.  You should be paying attention to the growing cracks in the system.