We get lots of questions on Berman’s Call about using stops. It’s been several years since I’ve done an educational segment on the use of stops.

This is how I think about stops and building positions. This is not the only way to do it, but it works for me. I have one overriding life rule that I tend to apply to most situations and that is Larry’s 80:20 rule. My methodology for doing anything as it pertains to most things in life, but investing specifically, is that 80 per cent of what I do is well done and that there is always 20 per cent that I can improve on. The key then is the post-trade analysis. Once a trade is done, we analyze it after the fact to see what we could have done better. This means execution. Did we buy too much, not enough, was the price right? Evaluating the post-trade is almost as important as the pre-trade analysis.

For me, what I chose to invest in has everything to do with evaluating the return and risk and less to do with what I think about the company, economic conditions, or the pothole I hit driving in to the office on any given day (meaning my emotional state when making the decision). This is why I believe within about 20 years, there will be very few traditional stock pickers left (largely because of cost pressures) and most of the money in the world will be managed by computers. Computers simply remove the emotional aspect of the investment decision, which is often your biggest cost.

When I’m given a dollar of client money to invest, my sole concern is to preserve and grow it. The best way I know how to do that is understanding the risk and return of the asset.

I love using Suncor (SU.TO) and the energy sector as the example for demonstrating lots of things. It’s a widely-known company that nearly every person in Canada has a direct or indirect impact. It’s also not made anyone any money in about a decade, so it’s a classic choice of when you buy it that matters most. The choice of when to buy something is a timing decision and I always poo-poo the folks that scoff at market timers, because they simply do not understand the basis for how expected returns are higher and risk is lower from a low point and expected returns are lower and risk is higher from a high point—subject for another day. 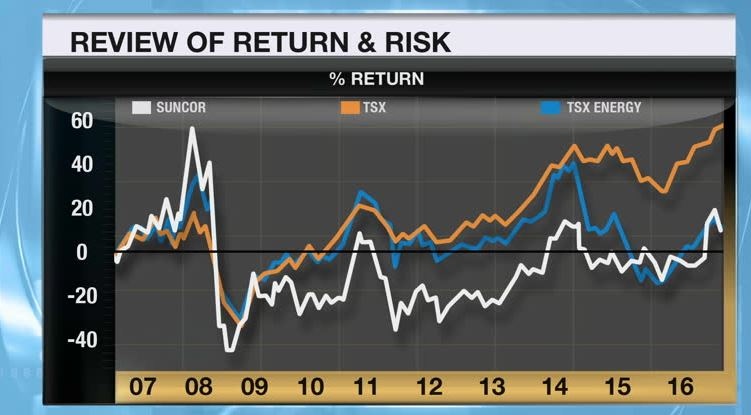 It’s gone up and down an awful lot and pays a good dividend, but there has basically been little return in the past decade. There were many times when you could have bought it and made considerable money, but unlike most stocks ones linked to a fluctuating commodity has a lot more uncertainty and volatility than a business that has more control over its revenue. The chart  shows the total return of Suncor versus the entire energy sector (XEG.T) and the entire S&P TSX composite (XIC.T). The stock has shown about the same return as the broad energy sector, but has mostly underperformed over the years. Because of its diversification of revenue, it tends to outperform in down markets and lag in good markets because it is not as exposed to the profitability of crude extraction itself. That’s a little higher today with the addition of Canadian oil sands, but it’s much more diversified than pure energy services or exploration and production companies.

First thing I consider is the overall position of the company relative to other things I can own that give me a similar expectations for total return (yield plus capital gain potential). The best long-term places to buy the stock are when it’s undervalued versus the sector and the market overall. The worst is when it’s been outperforming other parts of the market and its own pier group. This goes against conventional wisdom that you want to buy companies that are outperforming. That is true, but that is more of a momentum or growth style of investing, which we will look at next week as it pertains to use of stops and building positions.

Then I consider the risk side of things. I consider the weight of the position in my portfolio versus the target I am trying to beat. The reason you use a benchmark for expected return and risk is that it gives you a sense of passive versus active. Suncor is about 3.33 per cent of the S&P TSX and it’s capped at about 25 per cent of the XEG following the acquisition of COS. When I build a stock portfolio, I want at least 30 positions split across all economic sectors and geographies in order to achieve minimum diversification.

Do we want to be over or under weight the sector relative to our target? The Vanguard All Cap All World Index (VT) has an energy weight of 6.77 per cent and the TSX has a weight of 20.2 per cent. So depending on your goal, you would adjust accordingly. For me, running global portfolios, I would limit my positon in SU to about 3.33 per cent of the portfolio. I always look to scale in to a position—typically in thirds. Here’s where the idea of stops come in to play. Once we have built a full position in the security, we want to get out of it if it’s not working for us over some period of time. When we buy a positon, we ideally want at least the yield, but more importantly some capital gains. If it’s not working, we need to find something else that will make our money work for us. So we are not stopping out as in locking in a loss, but we are simply moving the money to somewhere else that has a better return to risk ratio.

An important psychological cost to investing is anchoring bias. Anchoring, is the behavior where people are swayed by something that has no relevance about what the stock might do in the future. For most, this is the cost basis of your positon. Understand this, because it will be one of the biggest investment mistakes you’ll ever make. The market on a go forward basis has nothing to do where you bought your positon so you MUST NOT care where you bought it. If you are felling stress in a loss positon, you did not buy it well. And that is the core lesson here. You need to evaluate the return and risk well in order to reduce the emotional bias we all can suffer from.

Bottom line right now is that the risks are too high to own Suncor relative to the potential return. I would start to buy it at about 35 and add all the way down to 25. I would only stop out and look for something else to own if after building a full positon, the stock continues to fall or lags the benchmark. I would then need to find a better place to put the money. Alternatively, we could write a $36 put for the next four months and take in about a two per cent premium, which would be something to consider when the risk factors relative to the return potential is not attractive. Annualized, we could generate about four-to-five per cent yield while we are waiting to buy it at a better price. That’s a higher yield than the stock with less than half the risk. That is simply smart investing.

Next week I’ll look at the momentum or growth style of investing. Use of stops in this style of investing is quite different. I would look to own things that are strong and getting stronger with less emphasis on value and relative value.

I love the idea of using smart indexing strategies to add returns and lower volatility in portfolios. Learn how to use techniques like this to evaluate risk and return in how to be a smarter investor in our 7th season across Canada speaking tour. Free registration at www.etfcm.com. Help us raise money to fight Cancer and Alzheimer’s by making a voluntary donation with your registration. Over the past few years, Berman’s Call roadshows have raised over $200,000 for charity thanks to BNN viewers and our sponsors.