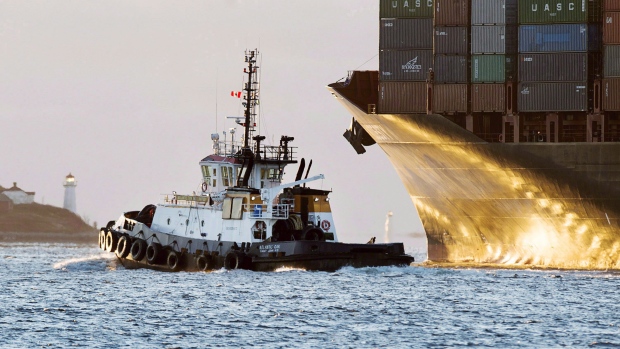 MONTREAL -- A major U.S. shipper is turning away from the Halifax port in favour of U.S. harbours due to ongoing blockades that have shut down Canadian National Railway Co.'s eastern network.

Atlantic Container Line, which typically berths two ships a week carrying everything from auto parts to French cheese, is now docking in New York and Baltimore instead to run cargo inland on American railroads.

Chief executive Andrew Abbott, whose company has relied on the port for more than 50 years, says the change means slower delivery and higher costs for importers, exporters and customers.

He says about 90 per cent of products on the rerouted container ships are bound for Central Canada or the United States.

Halifax Port Authority spokesman Lane Farguson says berths remain open with dockworkers still finding some work unloading freight from other shippers, but much of it has nowhere to go with the ongoing CN rail shutdown east of Toronto.

CN took the drastic step one week ago after protesters set up a blockade east of Belleville, Ont., on Feb. 6 in support of Wet'suwet'en hereditary chiefs who oppose a natural gas pipeline slated to pass through their traditional lands in British Columbia.