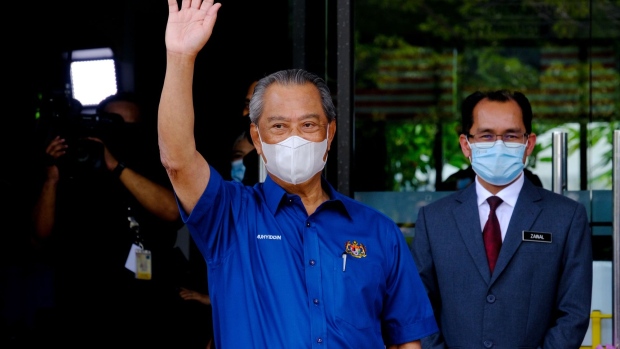 A resident enters an apartment building in Bukit Jalil, Selangor, Malaysia, on Thursday, July 15, 2021. Malaysia's accelerated vaccine roll-out has allowed the government to ease curbs in eight states even as the nationwide cases topped a record 11,000 for a second straight day on Wednesday. Selangor, the nation's most industrialized state, and the capital city of Kuala Lumpur continue to account for the bulk of the daily new infections. Photographer: Samsul Said/Bloomberg , Bloomberg

(Bloomberg) -- Malaysia’s parliament will sit for the first time this year on Monday, providing lawmakers an opportunity to grill Prime Minister Muhyiddin Yassin over his government’s handling of the pandemic and the economy.

The five-day sitting will see Malaysia’s emergency declaration and bills on fake news and penalties for breaching Covid protocols finally laid before the house for legislators to scrutinize. The emergency, set to end on August 1, handed the embattled premier wide-ranging powers to tackle the coronavirus outbreak, including shuttering parliament and introducing ordinances without legislative approval.

Despite Muhyiddin’s actions, daily coronavirus cases have more than tripled since the emergency was first imposed on January 12. Confirmed cases have increased nearly seven-fold, and are close to breaching the one million mark as public anger intensifies. Much of the country remains under lockdown.

“The best way for Muhyiddin to save himself is to embrace multi-partisan governance,” said Wong Chin Huat, a professor of political science at the Jeffrey Sachs Center on Sustainable Development at Sunway University in Malaysia. Otherwise, the king’s speech in parliament in September and the tabling of the 2022 Budget later this year could leave him vulnerable, said Wong. Both will be put to a vote and their defeat is equivalent to a vote of no confidence, he added.

Still, Muhyiddin is set to face colleagues from a slightly more stable position than a month ago. One major threat -- the powerful United Malays National Organisation’s call for him to quit -- was diffused when his cabinet, which includes UMNO members, pledged to continue backing him. UMNO MPs have also been given the party’s blessings to vote according to their conscience.

Another key risk was neutralized when the opposition coalition Pakatan Harapan said Wednesday they won’t propose a no-confidence vote against Muhyiddin. “We only want this special sitting to focus on important Covid-19 matters, and the people’s hardship throughout this economic crisis,” said Anwar Ibrahim, Lim Guan Eng, and Mohamad Sabu in the joint statement.

The government extended an olive branch ahead of the parliament’s opening, inviting opposition politicians onto a council tasked with overseeing the country’s recovery plan. It was a move “based on collaboration, inclusion and whole-of-nation,” said Finance Minister Tengku Zafrul Abdul Aziz in a statement Friday.

Lawmakers attending the sitting will be allowed to voice their views and seek clarification when ministers explain the country’s recovery plan, vaccination program, economic stimulus and emergency, according to the parliament speaker. Still, the debate would be meaningless if no changes are made to incorporate MPs’ suggestions, said Wong. “He can treat the parliamentary reopening cynically or use it intelligently to turn around his political mess,” he said.