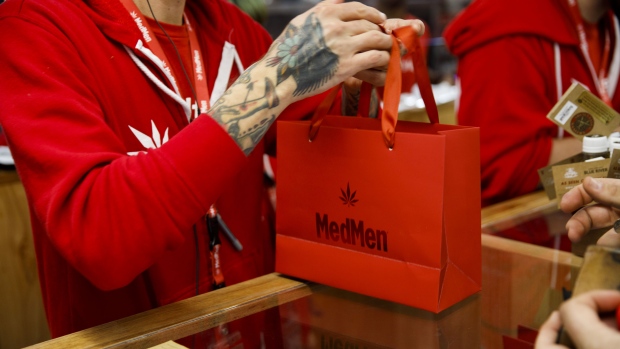 An employee hands a customer a shopping bag at the MedMen dispensary in West Hollywood, California, U.S., on Tuesday, Jan. 2, 2018. , Patrick T. Fallon/Bloomberg

MedMen Enterprises, the U.S. marijuana retailer known for its upscale, Apple-like stores, plans to finalize its reverse takeover listing next week and is set to become one of the biggest publicly-traded cannabis firms on the Canadian market, according to multiple people familiar with the matter.

California-based MedMen plans to list on the Canadian Securities Exchange after completing a reverse takeover of Ladera Ventures Corp., which was first announced last month, with a pre-money valuation of US$1.65 billion, the sources told BNN Bloomberg. That would likely make MedMen the largest company by market capitalization on the CSE, as well as the most valuable U.S.-based cannabis company listed in Canada.

MedMen’s upscale retail operations are comparable to the sleek and bright appearance of an Apple store, with salespeople in branded red T-shirts interacting with customers in an open-floor concept where spacious displays and iPads showcase their products.

In Canada, MedMen recently announced it would partner with cannabis producer Cronos Group Inc. in a joint venture to develop products and open MedMen-branded stores across the country when recreational marijuana is legalized later this summer.

A recent report by CIBC analysts estimated that Canadian recreational cannabis retailers could generate a 30-per-cent gross margin, but the most successful operators will be those with a retail concept focusing on service and ambiance given how pot prices are expected to be relatively similar.

A MedMen spokesperson declined to comment on the company’s plans, citing a quiet period ahead of its listing.

MedMen’s valuation was pegged to be slightly less than what the company initially planned to list at, the sources said, but its valuation rose due to increased investor interest after its reverse takeover plans were announced in April.

The share structure will keep MedMen’s founders in control of the business and the total amount of shares the company plans to make outstanding will depend on how much of a previously issued convertible securities product is converted to equity, another source familiar with the listing said.

“It was really oversubscribed and the company decided to provide the market with slightly more shares given the high interest in the listing,” said one of the sources familiar with MedMen's plans.

MedMen’s high valuation and listing plan comes amid exuberance from the investment community that has seen some of its peers including Canopy Growth Corp. and Aphria Inc. reach billion-dollar valuations. Canopy’s market capitalization is about $7.4 billion on the Toronto Stock Exchange, while Aphria is valued at about $2.6 billion.

“It’s reasonable for investors to look at the sector and believe that it’s overvalued, but there’s lots of demand for cannabis investments on the market and supply is limited,” said John Downs, director of business development for Arcview Group, a cannabis investment and market research firm, in an interview with BNN Bloomberg.

MedMen’s listing on the CSE is expected to overshadow Canadian medical pot firm TerrAscend, the next largest valued company on the exchange, which has a market capitalization of about $364 million.

The CSE has often been described as the “Cannabis Stock Exchange” given its proliferation of marijuana-related businesses – currently at 67 – that choose to list on the exchange, including several that have U.S. assets.

The TMX Group, which owns the Toronto Stock Exchange and TSX Venture Exchange, last year said its CDS division – which clears trades – was working with securities regulators to develop a policy on listed cannabis companies with operations in the U.S., but stopped short of a clearing ban on those firms.

An earlier version of this story included an inaccurate description of the TMX’s policy on cannabis companies with U.S. activities. BNN Bloomberg regrets the error.

Adam Bierman, CEO of MedMen, joins BNN to talk about MedMen’s deal with Cronos Group and their plan to publicly list on the Canadian Securities Exchange.