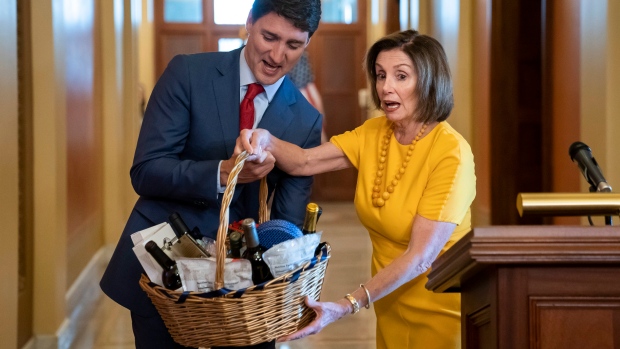 Prime Minister Justin Trudeau of Canada, left, and Speaker of the House Nancy Pelosi, D-Calif., exchange gifts as they settle a wager over the recent NBA basketball championship game between her Golden State Warriors and his victorious Toronto Raptors, at the Capitol in Washington, Thursday, June 20, 2019. , AP Photo/J. Scott Applewhite

Tareq Hadhad arrived in Nova Scotia in the middle of a mid-December night in 2015. For the past three years, he had lived in a Lebanese refugee camp after fleeing his native Syria. Hadhad was excited and nervous despite getting a bitter first taste of Canadian winter.

He didn’t know who he was supposed to meet at the airport, but saw roughly a dozen people clapping, cheering, holding signs and waving Canadian flags. It took Hadhad a moment, but he soon realized the cheering crowd was there for him. They were residents of a small Nova Scotian town called Antigonish; a group of refugee sponsors who wanted to give him and his family a safe, comfortable life in Canada.

The rest of Hadhad’s family arrived in Antigonish soon after and as they settled in their new home, they started selling chocolates branded as “Peace by Chocolate” at local farmers’ markets.

Sales and attention rose over the next few years, culminating last Thursday when Prime Minister Justin Trudeau gifted Hadhad’s chocolate to U.S. Speaker of the House Nancy Pelosi during a visit to the U.S.

“Peace by Chocolate is something Canada is very proud of,” Trudeau told reporters while handing the chocolates to Pelosi, which also included some Toronto Raptors gear to celebrate the team’s championship victory in the NBA Finals.

“Peace by Chocolate,” Pelosi said, as she held a bar up for photographers. “Sounds like an international agreement.”

Hadhad said Trudeau’s gesture was “absolutely unbelievable” to witness. “It was unbelievable on two levels … because the Raptors won and Americans get our chocolate. That’s the world I want to live in,” he said in a phone interview.

Hadhad’s newfound Raptors fandom is fitting. Like the Raptors’ championship win, it’s an underdog story. What started as a small kitchen-based operation has grown into a company with national distribution and plans to expand its staff to 500 in the next three years.

Chocolate-making has been in the family since 1986 when Hadhad’s father opened a factory in Damascus. When the Hadhads arrived in Canada, they were determined to re-open the family business.

Peace by Chocolate was an instant hit at farmers’ markets, usually selling out within 15 minutes of setting up their booths. Next was e-commerce, which expanded the business’s reach.

“To buy chocolate as a way of supporting the family and the chocolate was delicious. Well, the community loved that,” said Lucille Harper, chair of Syrian-Antigonish Families Embrace, an organization that sponsors Syrian refugees, including the Hadhads, in a phone interview.

Peace By Chocolate is “a beautiful name, a clever name, but most importantly the family believes it,” Harper added. “Peace is a core value for the Hadhad family.”

Last week wasn’t the first time Trudeau publicly mentioned Peace by Chocolate. Speaking at the UN Refugee Summit in 2016, he told the Hadhads’ story to a room full of world leaders, diplomats and dignitaries, giving the small factory its first taste of international attention.

Shortly after, the company struck a deal with Empire Co.’s Sobeys grocery store chain to distribute its products nationwide, taking the Peace by Chocolate brand from farmers’ markets in rural Nova Scotia to a 900-store distribution network in two years. The exposure and increased distribution helped push sales up 400 per cent in 2018, according to Haddad. Trudeau’s gift to Pelosi even kick-started Peace by Chocolate’s next goal: To strike a grocery chain deal south of the border so it can begin exporting its chocolate to the U.S.

Hadhad doesn’t credit the high-profile endorsement or the Sobeys deal for his success. He points to the people who greeted him at the airport that night in 2015.

Hadhad and his family see Peace by Chocolate as a way to give back to the community that brought them in. For a town of roughly 4,500 and an 11.6 per cent unemployment rate, building a company that employs 500 people is a way to show appreciation, he says.