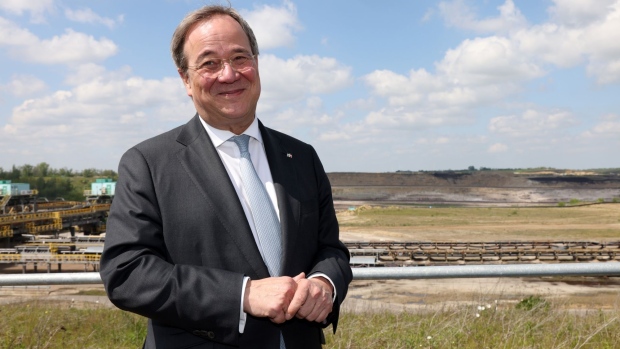 Armin Laschet, leader of the Christian Democratic Union (CDU), during a visit to the open cast lignite pit, operated by Central German lignite mbH (MIBRAG), near Profen, Germany, on Saturday, May 29, 2021. Saxony-Anhalt holds a state election on June 6. , Bloomberg

(Bloomberg) -- The head of Chancellor Angela Merkel’s party said he’d prefer to govern with the pro-business Free Democrats, rejecting higher taxes for top earners and criticizing the Greens in the buildup to Germany’s election in September.

“The energy transition must be socially acceptable,” Laschet, who’s running for chancellor for Merkel’s CDU-led bloc, said in an interview with the Sunday newspaper. “That’s what I don’t see in the Greens.”

Laschet, 60, is putting the finishing touches on his party’s election platform amid a rebound in polling. Support for the Greens declined for the fourth consecutive week to 20% in an Insa poll for Bild am Sonntag, while Merkel’s bloc -- the front-runner -- rose 1 percentage point to 27%.

He rejected calls by the Greens for tax increases, saying it would threaten Germany’s recovery from the pandemic slump.

“Tax increases surely are a completely wrong idea after the kind of crisis we’ve been through in recent months,” he said. He called for tax breaks for first-time home buyers.