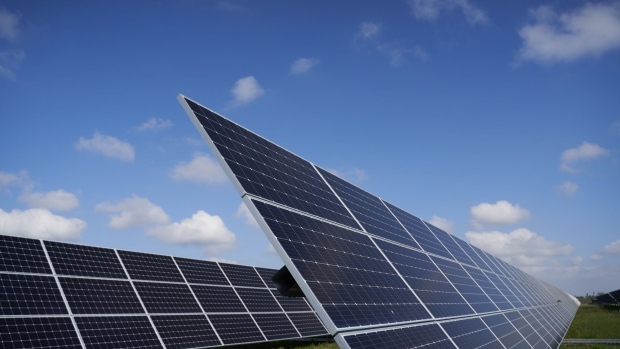 Photovoltaic panels at the Salsipuedes solar plant in Villa de Arista, San Luis Potosi state, Mexico, on Friday, Oct. 8, 2021. President Andres Manuel Lopez Obrador's plan to change the constitution to give control of the electricity market to state utility CFE would destroy Mexico's clean energy advances, according to a joint statement from the country's wind and solar associations. , Bloomberg

(Bloomberg) -- Mexico’s energy reform has been delayed until next year amid a lack of support for its passage by members of the opposition parties, according to a top ruling-party lawmaker.

The vote, which lawmakers had originally hoped to have this year, will instead be pushed into 2022, giving them time to try to gain the two-thirds majority they will need for it to be passed, said Juan Ramiro Robledo, the head of the lower house’s constitutional affairs committee and a member of the governing Morena party.

“The decision to carry out this reform is firm. It has not changed. It is an initiative of the president’s, and we have to put it to a vote,” said Robledo by telephone. “We’re going to discuss it with all of the congressmen that are willing to listen to us. There are some with whom we’ve made progress and convinced them we should change the constitution, but a large part of them are reluctant.”

How AMLO Push for Electricity Revamp Is About Power: QuickTake

The constitutional reform proposed by President Andres Manuel Lopez Obrador would give majority control of the electricity market to the state utility and limit private sector participation, rolling back a sweeping reform by the previous government. Though some opposition parties had come out against the plan, leaders of the PRI, the party that ruled Mexico for over 70 years last century, said earlier this year they were open to discussion, giving the government hopes for a quick passage.

Lawmakers have organized the first five public forums in the states of Tabasco, Veracruz, San Luis Potosi, Puebla, and Mexico City, Robledo said. They are also going ahead with plans to hold congressional forums next year. Ruben Moreira, PRI party leader in the lower house, said in November a lengthy debate would be a prerequisite for voting on the proposal.

“We know which things they dislike and which things are not passable for them, for example the cancellation of contracts, but we have not been able to explain clearly enough that it doesn’t mean expropriating,” said Robledo. “We cannot have an exclusively internal discussion in the lower house. We have to bring it to all other parts of the country.”

The president’s office offered its support for a thorough airing of the issues involved in the government’s proposals.

“Before approving, it is necessary to carry out a national debate on the electricity reform and that the whole of society be informed of the process and the arguments for and against the reform,” Jesus Ramirez, a spokesperson for the president’s office, said in a statement.

Spokespeople for the PRI referred Bloomberg News to earlier public comments by Moreira when asked for comment, including that a vote should be delayed until after next summer’s state elections. The president’s office did not immediately respond to request for comment.