A lot of homebuyers are sitting on the sidelines: Home Capital CEO

The comments and the earnings highlight “pockets of concern” arising among lenders, said Jaeme Gloyn, an analyst at National Bank of Canada. Investors will be watching closely to see what top executives at the country’s largest banks say about housing and the economy when they report fiscal third-quarter results this month.

“The provisions for credit losses generally came in a little bit higher than what was expected,” Gloyn said of the mortgage lenders’ results. Some of that is due to loan growth, he said, but it’s also because of changes in the economic models that Canadian lenders use to estimate expected credit losses.

EQ Bank, in a disclosure of the variables it uses to determine expected credit losses, reduced its base-case forecast for Canadian home-price growth over the next 12 months to 4.8 per cent last quarter from 5.6 per cent in the previous quarter. Home Capital was even more cautious, reducing its housing-price outlook to a 7 per cent decline, from a 1 per cent drop.

Canadian home prices have already started to retreat, dropping 1.7 per cent in July and bringing the cumulative drop from February’s peak to nearly 6 per cent, according to the Canadian Real Estate Association. Prices have dropped by double-digit percentages in a number of cities. 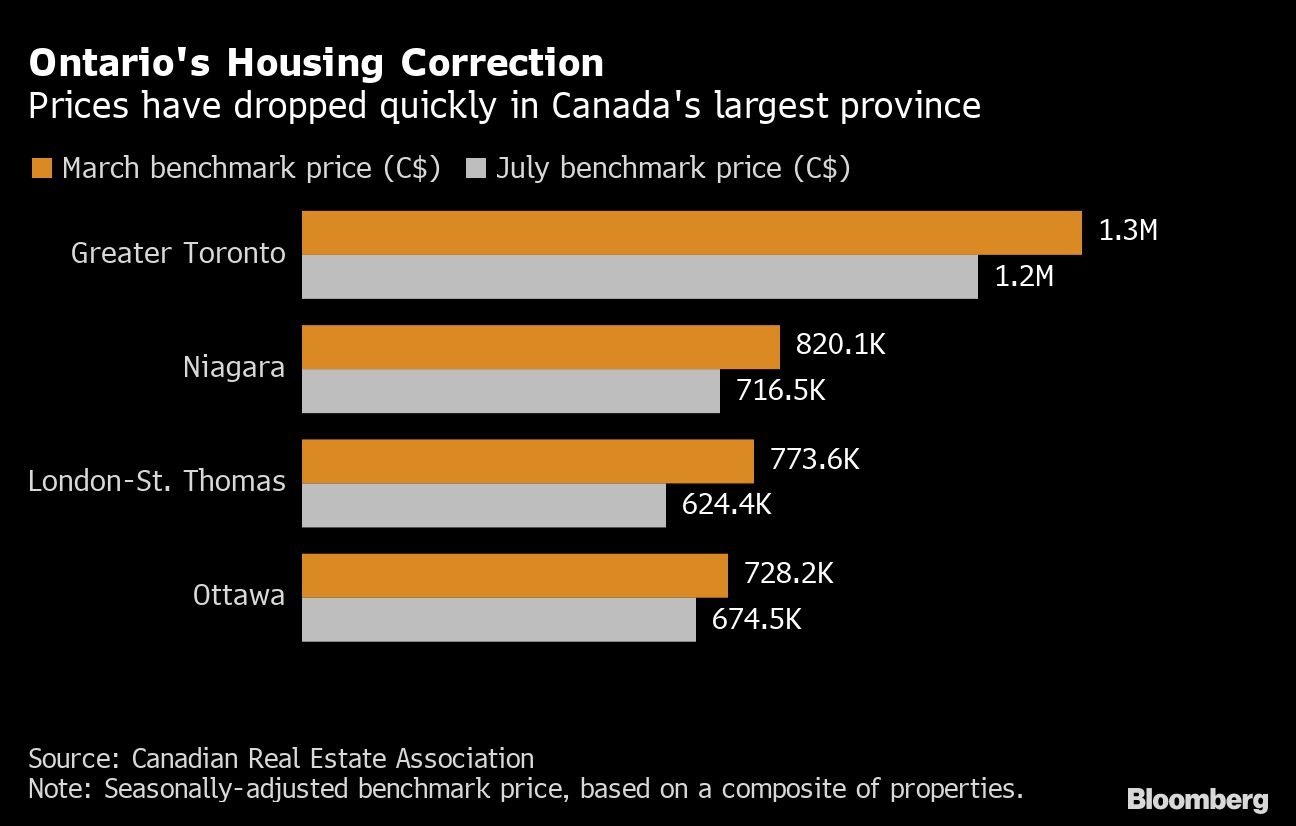 Canada’s six largest banks begin reporting their results for the quarter ended July 31 on Tuesday, and analysts are expecting them to take larger provisions for credit losses than in the previous quarter as the outlook worsens for the economy.

The variable that most directly affects loan losses is unemployment, and Canada’s labor market remains tight, with the jobless rate at a record low 4.9 per cent. That’s translating into a level of loan arrears that EQB CEO Andrew Moor said is the lowest in his 15 years leading the company.

And while Canada’s alternative lenders specialize in customer segments that the big banks avoid -- such as those who are new to the country, self-employed or have a bruised credit history -- they have strict underwriting guidelines, income-verification procedures and regulations designed to prevent a wave of defaults such as the US saw in the 2008 financial crisis, Gloyn said.

But that doesn’t make them immune to potential stresses. About 64 per cent of Home Capital’s borrowers will need to renew their mortgage within 12 months, and some could face payment increases of as much as CUS$850 (US$655) a month, stressing their ability to pay, Gloyn estimated in a note in July. EQB would likely have “roughly similar outcomes” in its Alt-A segment though the company doesn’t provide the disclosures needed to conduct that analysis, he said.

Home Capital nearly collapsed in 2017 after suffering a run on deposits when regulators alleged the company misled investors over the extent of fraudulent mortgage applications. Warren Buffett’s Berkshire Hathaway Inc. bought an equity stake of nearly 20 per cent and provided an emergency credit line to stabilize the firm.

Home Capital CEO Yousry Bissada, who took the helm after Berkshire’s rescue, said the lender may see its arrears increase and house prices soften. But he said borrowers would likely stop paying other debts before giving up on their homes and that the business is built to be a “fortress” in challenging times.

“We have strengthened our team and our culture, we’ve fortified our balance sheet and funding model,” he said on a conference call with analysts. “This makes us more resilient, and importantly, more nimble.”

Home Capital disclosed this week that it had rejected a takeover bid from an unnamed suitor.

​EQB, for its part, is getting more cautious on refinancings, debt-service ratios and loan-to-value ratios, Moor said on the earnings call. Still, those are “tactical moves consistent with our past practice, not wholesale changes in our already-sound approach,” he said.

Canadian home prices may retreat to their levels from last September or October while avoiding “huge corrections” that challenge the Canadian economy, he said later in an interview with BNN Bloomberg Television.

“We’re always looking for the areas we think might be the riskiest and making sure that our loan book is in good shape,” Moor said.