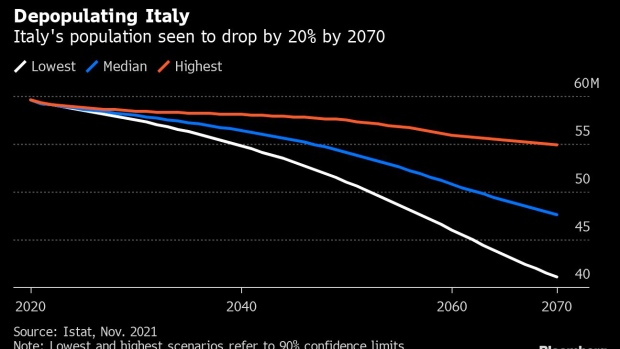 (Bloomberg) -- The world’s richest man is concerned Italians could become extinct due to one of the world’s lowest birth-rates.

“Italy will have no people if these trends continue,” Tesla Inc. founder Elon Musk, who has warned about the dangers of global depopulation in the past, said on Tuesday. He was answering a tweet by Rome-based cyber security researcher Andrea Stroppa, who had published a demographic trend chart showing birth-rate falling for decades.

Last year Italy reported its lowest ever birth-rate at little more than one child per woman, according to Italian statistical institute Istat. That means Italy counted seven newborns and twelve deaths per thousand inhabitants in 2021, Istat said. While that was partly due to Covid mortality, Istat sees the country’s population dropping by 20% by 2020 -- that’s 12 million fewer people.

“Most people believe that we have too many people on the planet. This is an outdated view,”  Musk said in 2019 at the World Artificial Intelligence Conference in Shanghai, debating with Alibaba Group Holding Ltd. Chairman Jack Ma. Assuming AI is fine, assuming there’s a benevolent AI, the biggest problem the world will face in 20 years is a population collapse, he had added.

(Updates with further reading in final paragraph. An earlier version of this story corrected a date in the third paragraph)