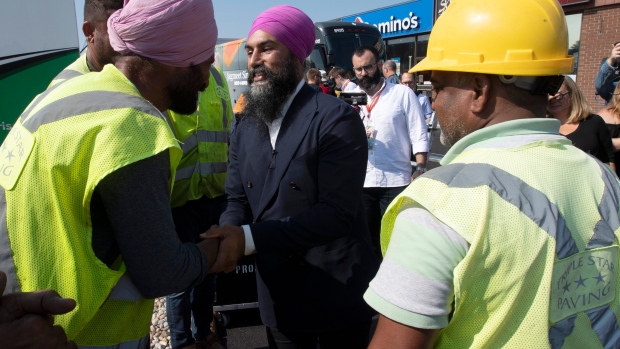 ESSEX, Ont. -- All Canadians should have access to medication that they need, NDP Leader Jagmeet Singh said Friday, while expounding broader themes of inequality in light of Justin Trudeau's blackface scandal.

The New Democrats are proposing to spend $10 billion a year to ensure that all necessary medication and medical devices are free at the point of care starting in 2020.

"We know that people are struggling with the cost of medication," he said at a campaign stop near Windsor, where he was raised and where he trotted out one of his favourite lines on public health care: "If you need medication in our country you should use your health card, not your credit card."

An NDP government would build on the amount provinces are already spending to buy medications, such as those provided to patients in hospital, and add the federal money, Singh said. The program, he added, would be delivered by the provinces and the NDP would look to examples from around the world and base coverage on the broadest formulary possible.

The proposed NDP plan would kick in sooner than the timeline recommended this year by an expert panel, which recommended establishing a national list of prescription drugs for pharmacare by Jan. 1, 2022, and expanding it by Jan. 1, 2027.

That panel, led by former Ontario Liberal health minister Eric Hoskins, said their suggested plan would save $5 billion a year. Canadians spent $34 billion on prescription medicines in 2018, the report said, and the cost is growing as Canadians get older.

Though Singh wanted to focus Friday on his pharmacare plan, he was also faced with various questions about the revelations that Trudeau wore blackface and brownface at least three times, as recently as in 2001.

Singh said he wanted to put the focus on people who are hurting because of those incidents, telling them they do belong, and are valued.

Trudeau has apologized publicly and spoken privately to members of his caucus and community leaders, and Singh revealed Friday that Trudeau's team has reached out to talk to the NDP leader, who is the first member of a visible minority to lead a federal party in an election.

Singh said he was open to having a private conversation, but also called out Trudeau for a "lack of action on clear and concrete steps to address inequality."

He touted the NDP's commitment to expunge all convictions for simple possession of marijuana, saying those charges have targeted people of colour.

"That is a policy that could help people who've been victims of systemic racism...Instead he favours pardons. That doesn't undo the injustice," Singh said.

"There is again, an ongoing pattern of behaviour here where he does not understand what people are going through and it shows in the policies. That to me is very, very concerning."

Singh was asked what more could be done to combat extremist views in Canada, and he said the hate crime laws should be strengthened, but underlying issues also need to be addressed.

"It's easy to be exploited because people are worried and they are afraid. What I want to say is that people are right to be worried and afraid, but the problem is because Conservative and Liberal governments have chosen to make life easier for the rich and harder for everyone else."