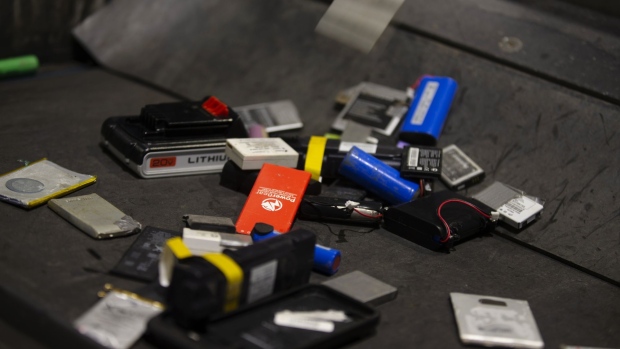 A planned US$3.1 billion merger of two Australian miners is set to create one of the world’s biggest producers of lithium products key to meeting fast-growing global demand for electric vehicle batteries.

The deal between Orocobre Ltd. and Galaxy Resources Ltd. is the biggest mining sector deal of the year so far, according to Bloomberg data, with shares of both companies closing at the highest in three years in Sydney. The merger would create the world’s fifth-biggest producer of lithium chemicals, the refined form of the raw materials that are used to make electric vehicle batteries.

Miners to battery makers have rushed to secure lithium supply amid expectations the EV frenzy will create a structural deficit as soon as this year, and prices are already roaring back after a three-year slump. Battery demand is expected to surge tenfold by 2030, according to BloombergNEF, as the global clean-energy transition accelerates. 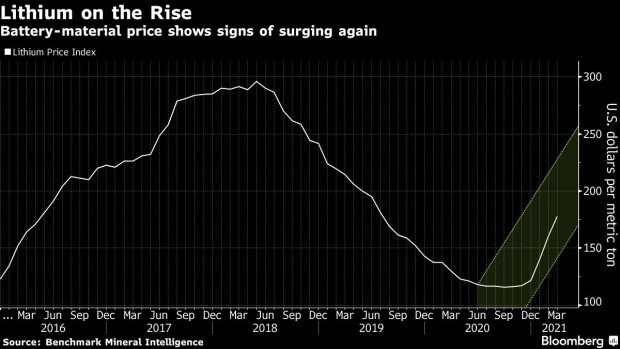 The new company “is going to be a globally relevant player in terms of lithium chemical production,” said Reg Spencer, head of mining research at Canaccord Genuity Australia Ltd. He said that it could grow to be number three producer by 2025 if all growth projects go ahead.

The AUS$4 billion deal values Galaxy at about AUS$3.53 a share, a 2.2 per cent discount to Friday’s close, and has the backing of both company boards. Orocobre’s Chief Executive Officer Martin Perez de Solay will head the new group.

Orocobre will offer 0.569 of its shares for every Galaxy share and will own 54.2 per cent of the merged company, with Galaxy holding 45.8 per cent. Orocobre was advised on the deal by UBS AG, while Galaxy’s adviser was Standard Chartered Plc. The deal is targeted for completion in mid August 2021.

The merged group, which has yet to be formally named, will have its headquarters in Buenos Aires, but its primary share listing will remain in Australia.

The deal gives the companies a geographically diversified set of assets. Orocobre sells lithium carbonate from its Olaroz operation in Argentina, while Galaxy has a mine in Australia and growth projects in Canada and South America.

Lithium raw materials are most commonly extracted at brine operations which pump liquid from underground reservoirs into vast evaporation ponds, or in traditional hard rock mines. China is the biggest player in electric vehicle batteries, with the majority of the world’s production capacity, and has a stranglehold over processing of the required commodities.

The growth profile of the combined group’s existing assets put it on track to grab a 10 per cent share of the lithium market over the next five to seven years, Perez de Solay said in an interview, backed by “a strong balance sheet that will enable us not only to deliver those projects but to continue to grow.” Top global lithium producers currently include Sociedad Quimica y Minera de Chile SA and Albemarle Corp.

Canaccord’s Spencer said there were risks in having the largest part of an operation in Argentina, given its history of geo-political and financial volatility, although Orocobre’s local management team had so far proven adept at navigating those risks.

“From Galaxy’s perspective, we were looking for a partner which had deep in-country Argentinian experience and we’ve got that in Orocobre,” said Simon Hay, Galaxy’s CEO, who will take on the role of president of international business in the new organization. The merger will help to de-risk Galaxy’s Sal de Vida growth project in the South American country, he said.