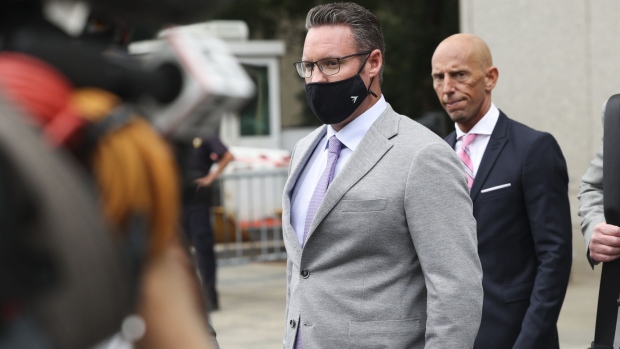 Trevor Milton, founder of Nikola Corp., center, exits federal court in New York, U.S., on Thursday, July 29, 2021. Milton is charged with misleading investors from November 2019 until around September 2020 about the development of Nikola’s products and technology, according to an indictment unsealed Thursday by federal prosecutors in N.Y. , Bloomberg

Milton, who is scheduled to go on trial in April, asked a judge on Friday to allow him to inspect and photograph certain prototypes and other Nikola property and places. He said the government and the company have refused his repeated requests.

Access to the evidence is necessary to refute claims that Milton misled investors, he said. Milton is accused of lying about the success of his debut truck, the Nikola One, and claiming the company had engineered and built an electric-and-hydrogen-powered truck called the Badger. He also allegedly claimed Nikola was producing hydrogen at reduced cost, and that it had developed batteries and other components itself.

“Inspecting these items, and demonstrating the functionality of the technology, go to the crux of his defense,” Milton’s lawyers said in the court filing.

Milton wants his lawyers and experts to inspect prototypes for the Badger, the Nikola One, and the UTV, as well as a hydrogen demonstration station and a media studio, all of which are located at a company facility in Phoenix.

Milton, who stepped down from the company in 2020, was charged in July with misleading investors about the electric-vehicle maker’s prospects in order to boost its stock price. He has pleaded not guilty.

Last month, Milton asked for the case to be thrown out, saying he wasn’t given fair notice that the alleged statements he made could be considered criminal and that prosecutors haven’t shown how his comments influenced purchases or sales of Nikola stock, among other arguments.

The following week, the company agreed to pay a $125 million civil penalty to the U.S. Securities and Exchange Commission without admitting or denying wrongdoing.