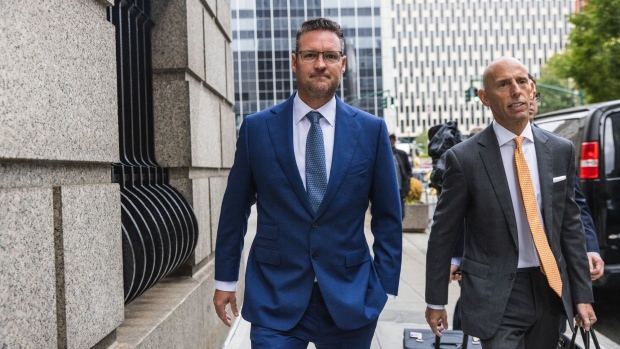 Trevor Milton, founder of Nikola Corp., left, arrives at court in New York, US, on Monday, Sept. 12, 2022. Milton, who enticed auto-industry leaders and investors with his promise for a revolution in electric trucks, faces a securities-fraud trial beginning this week on allegations that he lied about his company's development of environmentally friendly technology. , Bloomberg

The investor, Peter Hicks, testified on Wednesday that he was first contacted in March 2020 with an offer from Milton to pay $5 million in cash to buy the Wasatch Creeks Ranch, a sprawling Utah property 12 miles from Salt Lake City that features five miles of pristine fishing streams, which Hicks had bought earlier that month for $6.85 million.

Hicks told the jurors in federal court in Manhattan that he was wary because he had never heard of Nikola or Milton and didn’t like the looks of a purchase funded partly by stock in a company without revenue, calling it “pretty risky.”

“I believe in things that are very tangible to me, and that is real estate and cash,” Hicks testified.

Then, after a conference call with Milton that same month, Hicks changed his mind. On the call, Hicks testified, Milton told him the company already had $14 million in truck orders and an agreement with Anheuser-Busch to use Nikola trucks on a delivery route between Los Angeles and Phoenix. Hicks told the jury Milton’s assurances that Nikola had begun procuring charging stations for 13 routes meant it had contracts in place, a “crucial” piece of information for him.

“A pre-revenue company, I needed convincing to be even slightly interested in any of this,” Hicks said, explaining that he needed “something tangible to show they would produce substantial revenue.” The charging stations clinched it, he said.

Hicks said he agreed to sell the ranch that June and got $8.5 million in cash and options to purchase 515,095 Nikola shares at a below-market price, which were valued at $15 million when the deal closed in August 2020. That month, the stock was trading at more than $40 a share. But by December, when Hicks was first able to exercise the options, they had plunged to as little as $13.51. That was below the $16.50 strike price on the options, which made them “worthless,” he said.

Hicks said he never paid attention to the company’s Securities and Exchange Commission filings because all of his impressions of the company came from the conference call.

“This information was being conveyed to me by the founder and the CEO of Nikola, of a many-billion-dollar company,” Hicks testified. “It never struck me he would be making false representations -- in fact, made false representations. I thought it all to be credible and true.”

Milton was freed pending trial on $100 million bail secured by two properties he owns in Utah -- one of them the ranch, according to a civil suit Hicks filed against Milton. Milton paid $32.5 million for another ranch near Salt Lake City in August 2019, the highest sale price ever recorded for a residential property in the state. A 16,800-square-foot home on the property, called Riverband Ranch, boasts nine bedrooms, nine bathrooms and hickory floors.

Nikola went public through a reverse merger with a blank check company in June 2020 in a deal that made Milton into a billionaire several times over. At one point, the company’s shares ballooned to almost $80 each, giving Nikola a market capitalization greater than Ford Motor Co., all with scant revenue. Nikola’s market value plummeted after Milton and the company were accused of exaggerating the capability of its debut truck, the Nikola One.

Prosecutors accused Milton of making false and misleading statements on social media and other outlets to induce retail investors to buy the stock, and of wire fraud for deceiving Hicks, who sued Milton in federal court in Utah in March 2022 over the deal.

Milton’s lawyers contend that their client never intended to deceive any investors, was just following the company’s marketing plan and never said anything he didn’t believe to be true.

Hicks’s testimony came in the trial’s third week and near the end of the government’s case against Milton. Under cross-examination Thursday by Milton lawyer Torrey Young, Hicks admitted he made $3.2 million on the deal -- a profit of $1.6 million from the cash portion plus $1.6 million from a sale of stock he bought from Milton below market price in March 2021 as they tried to resolve their dispute.

Hicks said he eventually decided to sue Milton for more than $45 million in March 2022 after further negotiations stalled, including a proposed transaction in which Milton would buy another property from Hicks. Hicks testified that he didn’t exercise the stock options when he was able to in December 2020, with the shares above the strike price, because of the risk.

“You would have been in the money?” Young asked.

“You’re putting $8 million up, you better be wise in your decisions,” Hicks said, adding that even in the brief time it would have taken to exercise the options, the volatile shares could have sunk.

“No, I wanted to make a prudent decision, and it would not be prudent to exercise on those days,” Hicks responded.

The case is US v. Milton, 21-cr-478, US District Court, Southern District of New York (Manhattan.)