The world’s top oil producers pulled off a historic deal to cut global petroleum output by nearly a 10th, putting an end to the devastating price war between Saudi Arabia and Russia.

A week-long marathon of bilateral calls and ministerial video conferences brought the OPEC+ alliance and the Group of 20 nations together for an unprecedented agreement. But after swinging wildly in the first few minutes of trading, crude was down about two per cent in London.

But the deal -- while unprecedented -- wasn’t enough to boost oil prices as traders calculated that the cut to supply would barely dent the massive glut of oil that keeps growing as the virus shuts down the global economy. Brent traded 0.2% lower in London.

The talks had almost fallen apart late last week -- amid resistance from Mexico -- but came back from the brink after a weekend of urgent diplomacy. President Donald Trump intervened, helping broker the final compromise.

“Unprecedented measures for unprecedented times,”said Ed Morse, a veteran oil watcher who is head of commodities research at Citigroup. “Unprecedented in historical discussions of production cuts, the U.S. played a critical role in brokering between Saudi Arabia and Russia for the new OPEC+ accord.”

The big Oil Deal with OPEC Plus is done. This will save hundreds of thousands of energy jobs in the United States. I would like to thank and congratulate President Putin of Russia and King Salman of Saudi Arabia. I just spoke to them from the Oval Office. Great deal for all!

OPEC+ will cut 9.7 million barrels a day -- just below the initial proposal of 10 million.

“We have demonstrated that OPEC+ is up and alive,” Saudi Energy Minister Prince Abdulaziz bin Salman told Bloomberg News in an interview minutes after the deal was done. “I’m more than happy with the deal.” 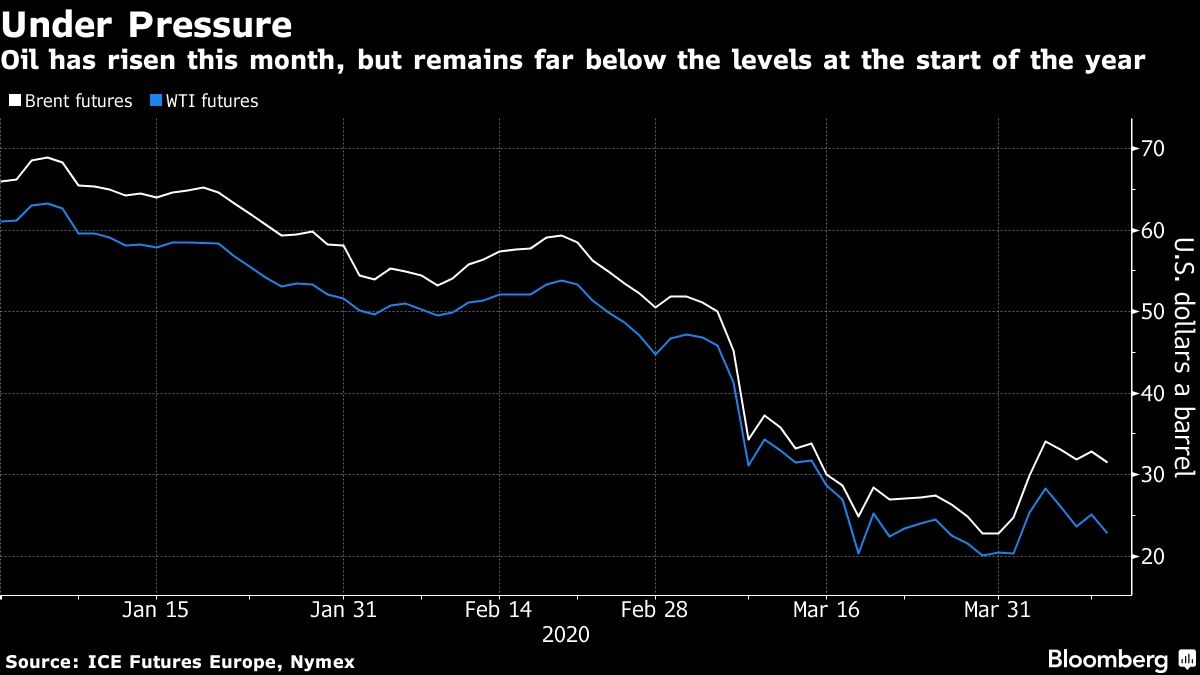 The accord caps a tumultuous month when Brent crude, the global benchmark, plunged to its lowest in nearly two decades, falling toward US$20 a barrel. Earlier this year, it traded above US$70 a barrel. OPEC+ ministers had to race onto a video conference call on Easter Sunday, less than four hours before the oil market reopened, to close the deal.

With the virus paralyzing air and ground travel, demand for gasoline, jet-fuel and diesel is collapsing. That threatened the future of the U.S. shale industry, the stability of oil-dependent states and squeezed the flow of petrodollars through an ailing global economy.

The U.S., Brazil and Canada will contribute another 3.7 million barrels on paper as their production declines and other G20 states will contribute 1.3 million. Still, the G20 numbers don’t represent real voluntary cuts, but rather reflect the impact that low prices have already had on output and would take months, perhaps more than a year, to come into effect.

Mexico won a diplomatic victory as it will only cut 100,000 barrels -- less than its pro-rated share, having blocked the deal since the plan was first revealed on Thursday. Now its future inside OPEC+ is uncertain, as it’s expected to decide over the next two months whether to leave the alliance, delegates said.

“Perhaps what’s most remarkable about Saudi Arabia and Russia delivering one of the largest supply cuts ever is that the person who brought them back together and pressured hardest to cut was historically OPEC’s harshest critic, President Trump,” said Jason Bordoff, a former White House official during the Obama administration and now at Columbia University.

Trump became the first American president to push for higher oil prices in more than 30 years, reversing his personal opposition to the cartel.

“I hated OPEC. You want to know the truth? I hated it. Because it was a fix,” Trump told reporters at the White House last week. “But somewhere along the line that broke down and went the opposite way.”

The production restraints are set to last for about two years, though not at the same level as the initial two months. Copying the model adopted by central banks to taper off their bond buying, OPEC will also reduce the size of the cuts over time. After June, the 10 million barrel cut will be tapered to 7.6 million a day until the end of the year, and then to 5.6 million through 2021 until April 2022.

The deal doesn’t take effect until May 1, leaving OPEC+ countries, which have significantly increased production over the last month, able to continue flooding the market for nearly another three weeks.

“We want to regain the stability of the oil market,” Prince Abdulaziz said.

With countries around the world extending their lockdowns, the death toll mounting in New York, and unemployment exploding in America, the oil market is now far more worried about consumption than supply. OPEC itself acknowledged the challenge, with its chief warning ministers demand fundamentals were “horrifying.” In an internal presentation seen by Bloomberg News, OPEC told ministers it expected global oil demand to plunge 20 million barrels a day in April.

“Demand is down by more than double the 9.7 million barrels-a-day cut agreed,” said Amrita Sen, chief oil analyst at consultant Energy Aspects Ltd. “And with the issue with Mexico taking so long to sort, the credibility of the group has taken a hit”.

--With assistance from Nayla Razzouk.