Impact of oil crash is going to get uglier: Tim Gramatovich

The collapse in oil prices is exposing a divide between Arab energy producers, with Bahrain the most vulnerable to the shockwaves rippling through the market amid the coronavirus outbreak, according to Bloomberg Economics.

Bahrain, Oman, Iraq, as well as Iran, are the weakest when measured by a set of five criteria ranging from international reserves and public debt to the price of oil needed to balance the current account. The scorecard found Qatar, the United Arab Emirates, Saudi Arabia and Kuwait are deemed robust.

“A snapshot of the metrics shows some countries might be comfortable now, but the direction has been heading toward broader weakness,” said Ziad Daoud, Bloomberg’s chief Middle East economist in Dubai.

In Iraq, the spreads on its dollar-denominated debt due in 2023 and 2028 climbed above 1,000 basis points this month.

The analysis by Bloomberg Economics has limits. The figures, for example, don’t capture external support, the political environment or undisclosed assets at sovereign wealth funds.

In the case of Bahrain, the smallest among economies of the six oil-rich Gulf Cooperation Council members, it has the added protection of a US$10 billion bailout package secured from its regional allies in 2018. Still, its fiscal buffers will come under strain, with Goldman Sachs Group Inc. expecting its budget deficit to widen to about 13 per cent of gross domestic product in 2020.

The gap in the yields between Bahrain’s and Saudi Arabia’s bonds due 2029 has widened to an all-time high, as investors demand a higher premium to compensate for the perceived risk of holding the island kingdom’s securities. 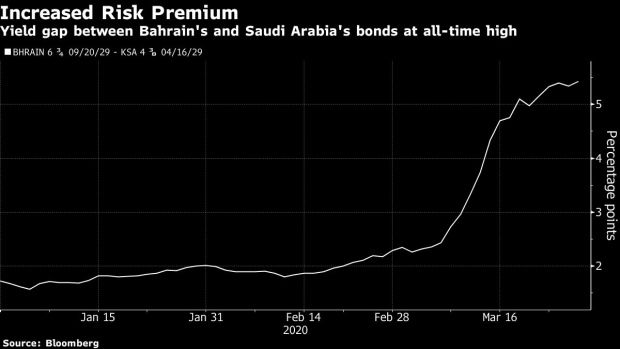 Goldman Sachs projects Bahrain’s government funding requirement will reach around US$3.8 billion this year, net of the US$1.8 billion financing from the 2018 Gulf lifeline. It also has a US$1.25 billion Eurobond coming due at the end of March.

Lacking sufficient fiscal reserves, Bahrain will likely “be more reliant on access to international markets in 2020 than its GCC peers, including Oman,” Goldman Sachs economists including Farouk Soussa said in a report this week.

“Ultimately, however, we believe Bahrain benefits from the explicit support of its richer GCC neighbors,” they said. “And while these neighbors are experiencing a degree of financial stress themselves in the current circumstances, we consider it likely that more such support would be forthcoming in the near term should it be required.”

The oil shock is also putting Oman’s currency peg in the spotlight. Facing its seventh straight year in the red, Oman’s fiscal shortfall this year was already expected to widen to 8.4 per cent of GDP, according to the International Monetary Fund.

Offshore traders are betting for the value of the Omani rial to decline within the next 12 months -- only possible if the sultanate abandons its fixed exchange rate against the dollar.