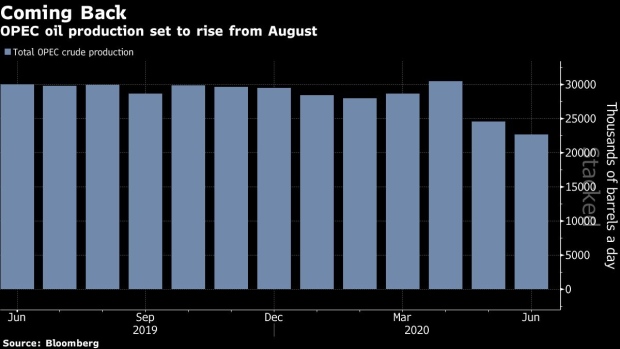 (Bloomberg) -- At almost any other moment in history, the promise of oil producers pouring millions of barrels of crude to the global market would have been cause for celebration in the world’s shipping hubs like Athens, Oslo and Tokyo. But Covid-19 means that this is a time like no other.

The Organization of Petroleum Exporting Countries and allied nations confirmed on Wednesday that they will aim to pump about 2 million barrels a day more crude in August.

Such increases -- equating to roughly 10% of what the world’s supertankers transport each day -- would normally translate into a big increase in cargoes for owners including Frontline Ltd. and Euronav NV. This time, though, the curbs pale in comparison with cuts that went before. On top of that, ships that had been storing crude are increasingly exiting that trade, freeing them to seek charters.

“From an absolute perspective, global oil transportation is still down substantially,” said Ben Nolan, an analyst at Stifel Nicolaus. “Near term, an increase in OPEC production should drive rates higher, but it won’t take too long for that to be offset by floating storage and cargo movements that are way down.”

Come August, OPEC+, as the alliance is known, will still be producing 7.7 million less crude than it was before the coronavirus pandemic triggered worldwide lock-downs, a collapse in oil demand, and then oil-supply restrictions. OPEC’s August production boost from some nations though will be tempered by compensatory cuts from other members that missed their targets in May and June.

In addition to that, Saudi Arabia and Russia look set to direct much of their extra output toward serving their own nations’ demand. In other words, no hike in cargoes. That, coupled with high inventory draw-downs, could further undermine the tanker market, said Espen Fjermestad, an analyst at Fearnley Securities in Oslo.

Only a few months ago, shipowners were racking up fees as high as $250,000 a day for the industry’s largest ships when OPEC+ flooded the market and floating storage was in high demand. That’s dropped to below $30,000, according to data from the Baltic Exchange in London.

That means the carriers are now just about making enough to break even, according to Lars Ostereng, an analyst at Arctic Securities ASA in Oslo.

“I am not particularly bullish,” he said. “There are a lot of negative factors including at least one major issue: inventory draw-downs which is coming up. Big time.”