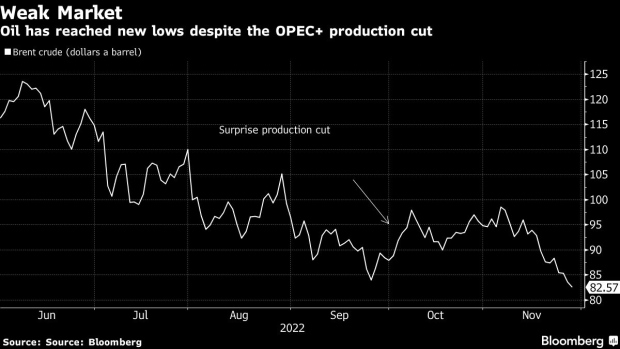 Abdulaziz bin Salman, Saudi Arabia's energy minister, during a Bloomberg Television interview following the 33rd meeting of the Organization of Petroleum Exporting Countries (OPEC) and non-OPEC countries in Vienna, Austria, on Wednesday, Oct. 5, 2022. OPEC+ agreed to cut its collective output limit by 2 million barrels day as it seeks to halt a slide in oil prices caused by the weakening global economy. , Bloomberg

(Bloomberg) -- OPEC and its allies are expected to consider deeper supply curbs when they meet this weekend against the backdrop of a faltering global oil market.

Saudi Arabia and its partners surprised traders -- and drew a fierce rebuke from President Joe Biden -- when they announced a 2 million barrel-a-day cutback last month. Even so, prices have since weakened, briefly slipping to almost $80 a barrel in London as the situation in China deteriorates.

Delegates from the group, who until this week had predicted they would pause to assess the impact of the cuts, now say additional reductions could be an option. Discussions within the alliance haven’t yet formally got underway before the Dec. 4 meeting.

Ten of 16 traders and analysts surveyed by Bloomberg this week anticipated a new supply cutback, with estimates ranging from 250,000 to 2 million barrels a day. Consultants FGE predict the cutback may be at the upper end of the range.

While the Organization of Petroleum Exporting Countries and its partners appear to be focused on the downside risks to the market, there are countervailing forces. Brent rebounded as much as 3.4% to $86 a barrel on Tuesday as signs of the group’s readiness to act lends support to futures.

The alliance remains under pressure from consuming nations to stave off inflation by keeping the taps open. In particular, additional cuts would run the risk of further straining relations between the Biden administration and Saudi Arabia.

Global markets are by some measures tight, with inventories in developed nations at the lowest since 2004. The day after OPEC+ meets, the European Union will impose a ban on seaborne imports of crude from Russia, while a price cap on the country’s oil is also under discussion by EU diplomats.

Russian output stands to slump 15% early next year as these measures bite, according to the International Energy Agency. Yet the country’s oil output has proven surprisingly resilient to international sanctions since its invasion of Ukraine, and the IEA’s forecasts often too pessimistic.

“Fundamental balance forecasts don’t suggest there is any urgency in cutting,” said Paul Horsnell, head of commodities at Standard Chartered Bank. “Especially as inventories are still on the low side.”

Whether these considerations are ultimately eclipsed may depend on the trajectory of crude futures in the coming days.

“OPEC+ will seriously consider a new production cut at its upcoming meeting, particularly if crude prices fall much below their current level in the next week,” analysts at Eurasia Group including Raad Alkadiri said in a report.

The outlook for key Asian markets continues to darken after protests over harsh anti-virus curbs erupted over the weekend, including demonstrations in Beijing and Shanghai. Chances are growing of a messy exit from the Covid-zero policy as infections spread and residents protest virus controls, according to banks including Goldman Sachs Group Inc.

The forward curves for Brent and West Texas Intermediate -- the two international benchmarks -- have developed a discount for near-term contracts known as a contango. The price pattern typically signals oversupply and encourages refiners to hoard unwanted barrels -- often a problematic occurrence for OPEC+ nations.

“Chinese demand for benchmark barrels has gone away,” said Energy Aspects’ Sen. OPEC+ members “don’t like contango. They would much rather get us out of it, which could require a big cut.”

Even the political blowback may not be as severe as it was after the last OPEC+ cut, said Helima Croft, chief commodities strategist at RBC Capital Markets LLC and a former CIA analyst. President Biden slammed Riyadh for the October decision, accusing it of abetting Russia’s war in Ukraine and warning of “consequences” for the kingdom.

“This time around, the White House seems prepared for a potential OPEC+ reduction and while it will not be welcomed, it will probably not lead to a meltdown either,” said Croft.