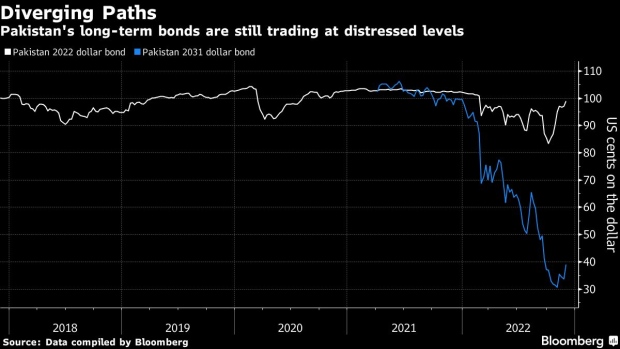 Vendors sell clothing and other goods along Tariq Road in Karachi, Pakistan, on Monday, Oct. 24, 2022. Pakistan is expected to announce its consumer price index on November 1. Source: Bloomberg/Bloomberg , Bloomberg

(Bloomberg) -- Pakistan’s central bank said it met a $1 billion bond payment on Friday, dodging the risk of a near-term default even as worries linger over its ability to pay its long-term debt. The nation’s bonds rallied.

The nation transferred the money for the sukuk dollar bonds due Dec. 5 three days before their maturity to Citigroup Inc., which will distribute the funds to creditors, said Abid Qamar, a spokesperson at State Bank of Pakistan. The notes climbed to 98.9 cents on the dollar Friday, marking a nearly 16-cent comeback from a record low of 83 cents in October, according to indicative pricing data compiled by Bloomberg.

Pakistan dollar debt outperformed emerging market peers, extending a weekly rally that’s seen the country’s spread over US Treasuries shrink more than four percentage points through Thursday. Dollar bonds due in 2025 gained 2 cents on Friday to 50.4 cents on the dollar, according to indicative pricing data collected by Bloomberg. Longer-notes due in 2031 and 2051 also climbed, to end the session at around 40 cents on the dollar.

“Now that the overhang of the 2022s is behind us, and even though the situation has a long way to improve, the best way to get exposure is the 2031s and 2051s,” said Oren Barack, managing director of fixed income at New York-based AGP Alliance Global Partners. “If it does default, you have the closest to recovery values. If things materially improve for the country, those would rally the most.”

While Pakistan is expected to meet its short-term debt obligations, its longer-term bonds are still trading at distressed levels as investors worry over its ability to emerge from a crisis. Moody’s Investors Service and Fitch Ratings downgraded the nation deeper into junk in October after devastating floods jeopardized its fiscal stability.

Talks with the International Monetary Fund for the next loan tranche have also been delayed as the nation evaluates how much the rebuilding will cost. Pakistan needs to repay about $25 billion in the year started July, though most of it has been rolled over or paid, State Bank of Pakistan Governor Jameel Ahmad has said.