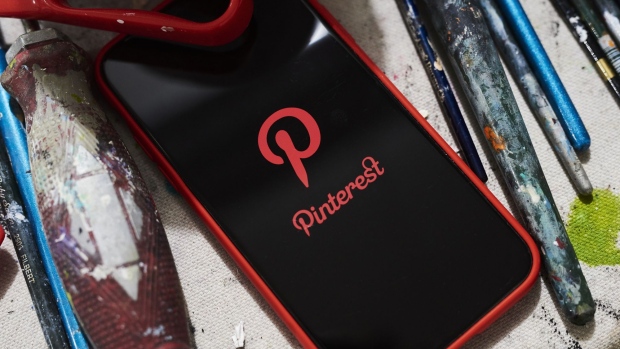 Pinterest app in the Apple App Store is displayed on a smartphone in an arranged photograph taken in Saint Thomas, Virgin Islands, United States, on Friday, Jan. 29, 2021. Pinterest Inc. is scheduled to release earnings figures on February 4. , Bloomberg

San Jose, California-based PayPal has recently approached Pinterest about a potential deal, the people said, asking not to be identified because the talks are private. The companies have discussed a potential price of around $70 a share, the people said.

That would value Pinterest’s publicly-traded Class A stock at roughly $39 billion, implying a valuation of $45 billion for the entire company when its untraded Class B shares are taken into account. A deal at that level would represent about a 26% premium to Pinterest’s Tuesday closing price of $55.58.

Pinterest shares surged in New York trading Wednesday, temporarily triggering a trading halt. They jumped as much as 19%, hitting a high of $66 apiece. Shares of PayPal were down 3.3% at 11:47 a.m. in New York, giving the company a market capitalization of about $309 billion.

A boom in online shopping has helped PayPal stock more than double since the start of last year, giving the company a market capitalization of nearly $320 billion. Those gains give it a strong currency it could use for acquisitions.

PayPal’s interest comes at a complicated time for Pinterest. The social media company announced this month that co-founder Evan Sharp, who oversaw its design and product teams, is stepping down. It’s also been dealing with a number of accusations from former employees that Pinterest discriminated against female workers.

Pinterest went public in an April 2019 initial public offering valuing the company at just over $10 billion.

Pinterest offers a visual search and scrapbooking platform where users can save, collect and group images by themes. It benefited in the early stages of the pandemic as advertisers flocked to social media sites to woo a captive audience that embraced a shift to e-commerce.

The company has been introducing new tools to help creators make their “pins” shoppable, drawing a more direct connection between content on Pinterest’s site and online purchases. Pinterest shares hit an all-time high in February, but they have since fallen as usage slowed with the easing of Covid-19 restrictions.

In July, Pinterest reported monthly active users for the second quarter that missed the average analyst estimate and said it had a lack of visibility on key engagement drivers going forward.

PayPal’s appetite for acquisitions has been increasing in the past few years as it snapped up competitors and moved into new markets. It purchased European small-business commerce platform iZettle in 2018 as part of a bid to better challenge Square Inc.