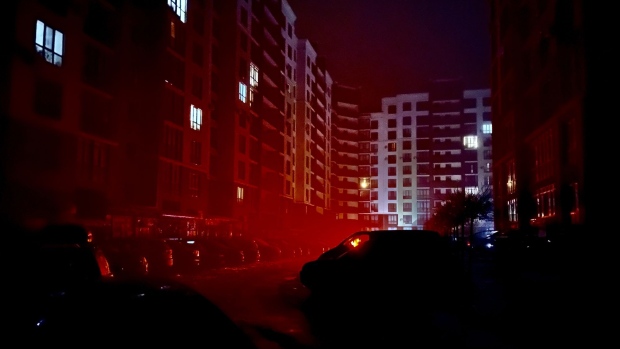 Light from homes within apartment blocks Pedestrians during a blackout in Kyiv, Ukraine, on Tuesday, Dec. 6, 2022. Ukrainians have been no strangers to hardship over the past century, but their dogged resilience and solidarity in the face of Russian bombardment has been an enduring image of a war that started at the tail end of last winter. , Bloomberg

Ukraine’s capital is grappling with power and heating outages and the 35-year-old sales assistant says demand for items like backpacks has been replaced by the more urgent need for warmth, especially after nightfall. Camping gas stoves and their cartridges are also flying out the door. At least it’s keeping the business going in a tough war economy.

“We are ready to work for as long as our resources allow,” said Pomazan, whose store uses a portable generator and batteries to power festive-style lights for basic illumination and to keep its card payment machine running. “We have just changed our range of goods.”

Ukrainians have been no strangers to hardship over the past century, but their dogged resilience and solidarity in the face of Russian bombardment has been an enduring image of a war that started at the tail end of last winter. And as temperatures plunge and the days get even shorter, another big test of that is surely still to come as Vladimir Putin’s latest assault triggers blackouts across the country.

Kyiv officials raised the prospect of mass evacuations before Mayor Vitali Klitschko clarified he didn’t want to see a new exodus. In the city, meanwhile, a core of people is united behind President Volodymyr Zelenskiy’s message to his nemesis in Moscow: Ukraine will live without food, heating and water if it means not having to live with Russia.

Some say they are taking it in their stride as the next stage of a long conflict, others are planning more meticulously after routines were upended again. There’s also humor. Memes on social media make jokes about how people took expensive classes on time management and failed, only to be taught it quickly by the electricity distributor.

Ukrainian cities and towns have been in darkness since October when rolling and emergency blackouts started. Power generators are now in short supply. Popular private post office Nova Poshta says on its website it can deliver them from abroad. Public service ads on TV suggest using candles on the top shelf of an oven to heat water.

Building engineer Nataliya Gavrilchenko has spent all the war in Kyiv with her children, rather than join the 250,000 or so of the city’s 3.6 million pre-invasion population that sought refuge elsewhere. To her, this is just another phase.

When the power goes out, she lights emergency lamps that can run from a transformer for up to six hours. Her office has a diesel generator so there’s always light and electricity. She’s allowed to come with her children to charge portable devices such as phones and her laptop. For now, she can also cook at home.

“We have gas, so no problem with food and hot tea,” said Gavrilchenko, 41. “What about reserves? We are in Ukraine, so we will find a bag of potatoes!” she quips.

Anna Storozh, who manages a sportswear store in Kyiv, watched the strikes on a local energy plant on Nov. 23 from her home in the Lisovyi Masyv apartment blocks. On that day, Zelenskiy said electricity was completely cut off in 11 of Ukraine’s 24 administrative regions, or oblasts, not including annexed Crimea. She’s still unfazed, using batteries and LED lamps for her shop and visiting cafes to access the Internet when hers has been knocked out.

“They are enough to wait out the blackouts, plus, I already know all the cafes where there are generators,” said Storozh, 32. “On the day of the shelling we did not have water and light for quite a long time, but all was okay. The lack of electricity and the Internet, of course, adds difficulties, but they are not critical for me and our business.”

Russia launched more than 600 missiles on Ukraine since Oct. 10, according to Ukraine’s government, when it switched to a tactic of shelling energy infrastructure including in Kyiv. The shift came after Russia had to retreat from areas its forces previously occupied. Ukraine’s military managed to liberate more than 1,800 locations out of 3,700 occupied by Russia since February, Zelenskiy said.

The Kremlin has acknowledged its army is targeting power infrastructure, while claiming that’s because it is used by the military. It’s also still halting production from the nuclear power plant at Zaporizhzhia, Europe’s largest.

The Ukraine national grid is down by about 30%. Cities are left without power, water, heating or all three for lengthy periods in a country whose 20th century history was defined by periods of oppression — and famine — by its larger neighbor.

For now, the thermostat still manages to get above freezing and there’s no sign of a fresh wave of Ukrainians leaving, according to the border guard service. Not everyone is willing to see how bad it gets, though.

Denys Petrenko works in IT and hasn’t left Kyiv thus far, though that may change if the blackouts worsen. He works from home most of the time — the windows of his apartment still with their protective film.

“The situation without electricity and water affects me a lot, especially if the blackouts are for a long time,” said Petrenko, 31. “If the situation worsens, and there are blackouts for days, I plan to leave Kyiv.”

Putin may be counting on that, yet Zelenskiy’s message of defiance has resonated in Kyiv. “Cold, famine, darkness, thirst — it’s not as scary for us and deadly for us as your friendship and brotherhood,” he said in September when Russia hit Kharkiv’s electricity plant as a prelude to what would come.

The capital is digging in. Mayor Klitschko, who was publicly criticized by Zelenskiy over emergency provisions, vowed to install Christmas trees to maintain spirits — however the lights might have to get powered.

Georgy Grebniov, manager of an apartment building in one of the city’s largest districts, is one of them. He built a shelter in the basement near the start of the war nine months ago where people could hide from shelling. He also distributed food to the vulnerable. He’s now doing that again, using his other role as head of a charitable foundation to build a network of supplies and secure a power generator given the high demand for them.

“Our situation is difficult, but we can live,” said Grebniov, 40. “Better without light than with Russia. If the question is to endure and survive the winter than to lose the future and well-being of our country, then we will definitely endure. And I will do my best to adapt.”