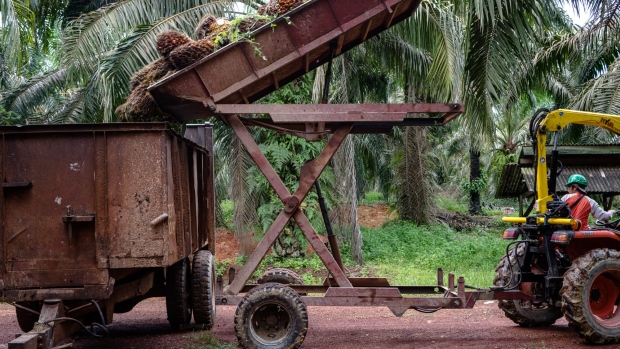 Harvested oil palm fruits are loaded into a trailer at the Bukit Senorang palm oil plantation, owned by United Malacca Bhd., in Pahang, Malaysia, on Friday, Oct. 27, 2017. United Malacca, one of this year's top 10 Malaysian palm oil stock performers, is looking to drones, clones and planting other crops to overcome challenges from labor shortages to price volatility. , Bloomberg

(Bloomberg) -- Indonesia, the world’s largest palm oil producer, wants to reshape the industry after the state auditor found that about 81% of plantations broke various state regulations.

Violations include operating in conservation and peatland areas as well as non-compliance with Indonesian Sustainable Palm Oil standards, said Luhut Pandjaitan, Coordinating Minister of Maritime Affairs, citing findings by state auditor BPK. He is also the minister in charge of the palm industry.

The results will be reported to President Joko Widodo and the government will tackle these violations, he said. “We will seek a solution, we can’t just let them be,” Pandjaitan told reporters in Jakarta on Friday. The government is considering legal action, including fines, for the violations that started 20 to 25 years ago, he added.

Palm oil plantations are often blamed for creating pollution from illegally burning land to clear it and for destroying forests and endangering orangutan habitats. These concerns have prompted the European Union to place stricter limits on the tropical oil’s use in biofuels. To mitigate the damage, Widodo signed a rule this month to extend a ban on the issuance of new permits that allow forests and peatlands to be converted into palm plantations. The ban lasts for an unspecified period.

BPK found that many of the violations were committed by big companies, covering million of hectares of plantations in the country’s main-growing areas in Sumatra and Kalimantan, BPK Board Member Rizal Djalil, said. He declined to name the companies.

To contact the editors responsible for this story: Anna Kitanaka at akitanaka@bloomberg.net, Atul Prakash