Federal Reserve Chairman Jerome Powell said the U.S. central bank is keeping a close eye on fallout from the deadly coronavirus outbreak in China, singling it out among risks threatening the U.S. and world economy.

“In particular, we are closely monitoring the emergence of the coronavirus, which could lead to disruptions in China that spill over to the rest of the global economy,” Powell said in prepared remarks he’s scheduled to deliver before U.S. lawmakers Tuesday.

Powell stopped short of saying the outbreak had changed the Fed’s baseline outlook for the U.S. economy, or the expectation among many members of the Federal Open Market Committee that rates will remain on hold this year.

Coronavirus, which has killed more than 1,000 people, has prompted the world’s largest-known quarantine effort and slowed large portions of China’s economy, disrupting travel and commerce worldwide.

Powell is set to appear before the House Financial Services Committee at 10 a.m. in Washington. 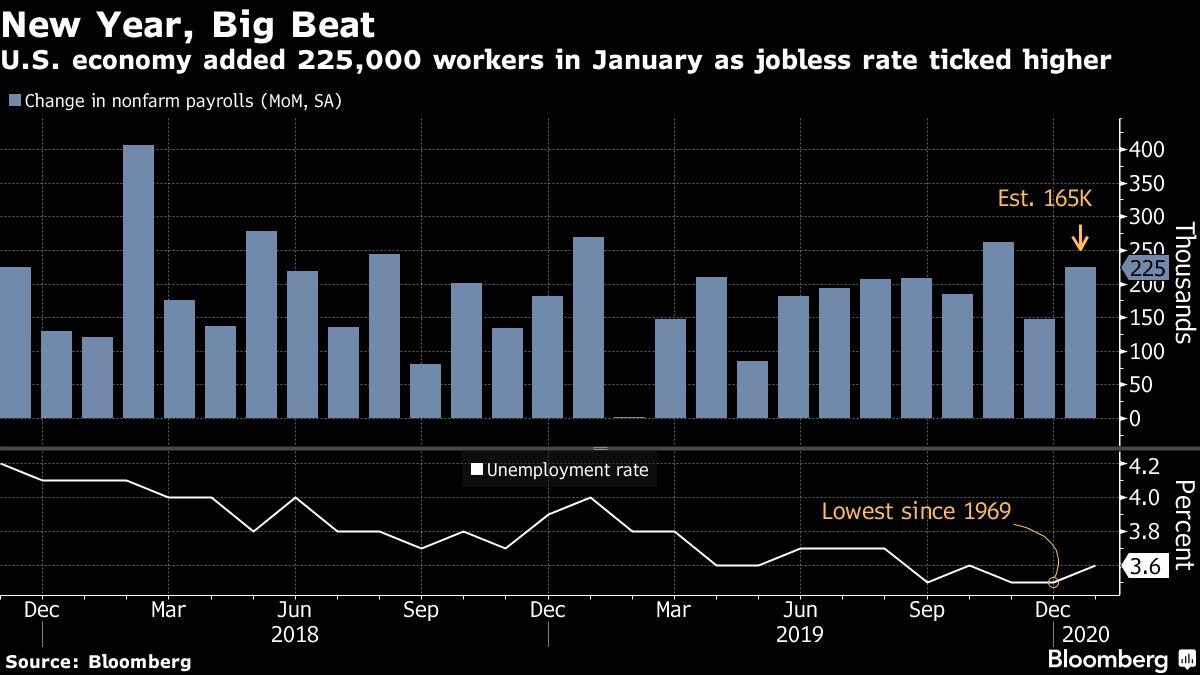 The Fed chief will answer questions from lawmakers following his prepared remarks. He’s also scheduled for a hearing before the Senate Banking Committee at 10 a.m. Wednesday as part of his semi-annual testimony to Congress.

Fed officials have dialed up their concern over the coronavirus in public remarks in recent days. Vice Chairman Richard Clarida called it a “wildcard” on Jan. 31. The Fed’s Semiannual Monetary Policy Report, released Feb. 7, said it was a “new risk” that could potentially interfere with trade, depress commodity prices and cause the U.S. dollar to appreciate.

Some private-sector economists have been less cautious, marking down their estimates for first-quarter growth in the U.S., while investors are betting the Fed will respond with an interest rate cut later this year.

In his prepared remarks, Powell provided a mostly positive picture of the U.S. economy -- which was dented but not significantly damaged by slower global growth and international trade disputes in 2019.

“Economic activity increased at a moderate pace and the labor market strengthened further, as the economy appeared resilient to the global headwinds that had intensified last summer,” he said.

Powell said the central bank had been successful in containing a sudden September spike in overnight funding rates that briefly pushed the Fed’s benchmark lending rate to stray outside its target range.

The central bank has conducted emergency lending into the market for repurchase agreements and, in October, began purchasing $60 billion a month in Treasury bills. The latter move has boosted bank reserves, allowing banks to feed money into the repo market in place of the Fed.

“As our bill purchases continue to build reserves toward levels that maintain ample conditions, we intend to gradually transition away from the active use of repo operations,” he said. “We intend to slow our purchases to a pace that will allow our balance sheet to grow in line with trend demand for our liabilities.”

Powell repeated his concerns over longer-term issues holding back growth in the U.S. economy.

“Finding ways to boost labor force participation and productivity growth would benefit Americans and should remain a national priority,” he said.

He also warned lawmakers the economy would need support from fiscal policy in the event of a downturn, and pressed them to put the federal budget on a sustainable path.

Coronavirus emerged as an economic threat in recent months just as the global outlook was beginning to brighten. Powell and his colleagues cut rates three times in 2019 to guard against the risks posed by trade tensions, slow global growth and below-target inflation. Since late last year, however, Fed officials have said monetary policy was in a good place and would remain unchanged unless their outlook for the economy changed materially.

Completion of the China phase-one trade deal, Britain’s avoidance of a sudden, no-deal exit from the European Union and a slight improvement in global manufacturing data pointed to a more stable outlook for 2020 after a decidedly rocky 2019.

“Some of the uncertainties around trade have diminished recently, but risks to the outlook remain,” Powell said.