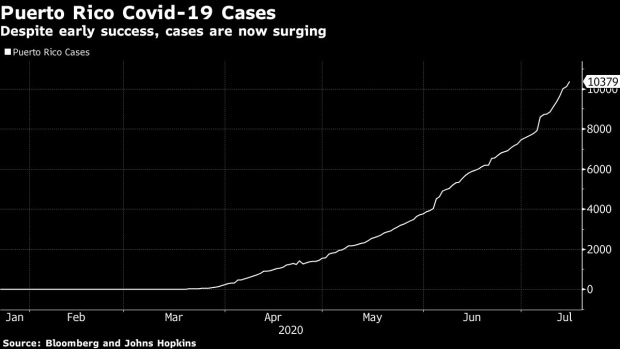 (Bloomberg) -- Puerto Rico officially reopened for tourists Wednesday, even as the U.S. commonwealth sees a surge in Covid-19 cases and hospitalizations that threatens to undermine its early gains against the pandemic.

Incoming passengers are now required to present a recent Covid-19 test or isolate themselves for 14 days. The new rules are designed to protect the island’s fragile economy from the virus that is raging on the U.S. mainland. But a series of grim data points suggest local efforts to control the outbreak are failing.

On Wednesday, the Health Department reported hospitalizations due to Covid-19 had hit a high for the second day in a row at 254 patients. The island of 3.2 million is also seeing rising numbers of confirmed and probable cases, with the rolling seven-day total reaching a high of 1,634 on Wednesday.

Alarmed by the surge, Governor Wanda Vazquez has warned that she will shutdown sectors of the economy again if needed.

“We will not shy away from measures if they protect the lives of our citizens,” she said during a press conference Monday. “We will not allow everything that we’ve achieved to be undone.”

Vazquez won early praise from public health officials when she imposed a curfew and shut all non-essential businesses in mid March, among the first U.S. jurisdictions to do so. And while the Federal Aviation Administration rejected her request to shutdown incoming flights, she warned potential tourists that they weren’t welcome until the pandemic subsided.

Since then, she has allowed the economy to reopen with mandatory face-mask policies and other social-distancing measures in place. But four months into the health crisis, compliance fatigue is setting in. Local media have been full of pictures of crowded bars and beaches where the health protocols are openly flouted.

Puerto Rico’s Chamber of Commerce has warned that a broad new lockdown would be “devastating” for the bankrupt island that has been stuck in a decade-long recession. Tourism is a small but critical sector in the financially strapped commonwealth, representing about 6.5% of the economy.

“Without a doubt, without health there is no economy,” Chamber President Juan Carlos Agosto said in a statement. “But there’s also no doubt that, before any decisions are made that will impact our citizens and our businesses, we have to study and evaluate all the data on health, contagion and the economy.”

Puerto Rico’s Comeback Was Nigh, But Then the Coronavirus Came

The chamber is asking Vazquez to aim any new regulations at sectors that are showing high infection rates.

Vazquez’s handling of the crisis is under a microscope as she faces an Aug. 9 primary challenge from within her New Progressive Party.

Her rival in that race, Pedro Pierluisi, Puerto Rico’s former non-voting delegate to the U.S. House of Representatives, has praised her for declaring a lockdown early on, but says she has failed at everything else.

“Instead of chastising, threatening and blaming others, we should have done contact-tracing on time, produced reliable statistics and provided constructive guidance,” he wrote on Twitter earlier this week, “so we would have the information to act accordingly.”