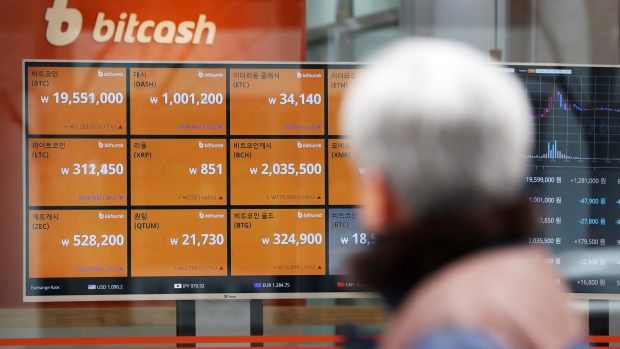 A pedestrian looks at a monitor showing the prices of virtual currencies at the Bithumb exchange office in Seoul, South Korea. , Bloomberg

It’s looking more and more like QuadrigaCX founder Gerald Cotten mismanaged the digital-asset exchange before he died, with cryptocurrencies from clients ending up at rival marketplaces in his personal accounts.

The latest report from Ernst & Young, which is overseeing the bankruptcy process for Quadriga Fintech Solutions Corp., paints a clearer picture of a Vancouver-based firm that lacked financial reporting and operational controls, run primarily by a founder whose actions ultimately led to its collapse, leaving hundreds of customers owed millions in cash and cryptocurrency.

“Quadriga’s operating infrastructure appears to have been significantly flawed from a financial reporting and operational control perspective,” the June 19 report said. “Activities were largely directed by a single individual, Mr. Cotten, and as a result typical segregation of duties and basic internal controls did not appear to exist.”

Cotten ran Quadriga mostly from his laptop, and his sudden death in December while traveling in India threw the business into disarray. Speculation has swirled around the firm as a series of peculiar details have filtered out, including that digital storage accounts used by Quadriga to hold Bitcoin for clients were empty for months before Cotten’s death.

There were “significant volumes” of cryptocurrency transferred off the Quadriga platform into competitor exchanges and into personal accounts controlled by Cotten, the report said.

“It appears that user cryptocurrency was traded on these exchanges and in some circumstances used as a security for a margin trading account established by Cotten,” according to the report.

Competitor exchanges received multiple forms of cryptocurrencies from Quadriga wallets from 2016 through 2019 -- 9,450 Bitcoin, 387,738 Ethereum and 239,020 Litecoin, according to the report. Quadriga’s cryptocurrency reserves were “adversely affected” by trading losses and incremental fees charged by other exchanges, the report said.

“The conversion of user cryptocurrency into other currencies through competitor exchanges resulted in incremental fees being incurred and currency exchange fluctuations relative to the original currency generating gains and losses,” the report said. “In addition, it appears that the activity in the exchange accounts resulted in overall trading losses.”

The late CEO also created accounts under aliases where “unsupported deposits” were used to trade within the platform, resulting in inflated revenue figures, artificial trades with users and ultimately the withdrawal of cryptocurrency, the report said. And “substantial funds” were transferred to Cotten personally and other related parties.

Ernst & Young said it learned from one exchange that Cotten established a margin account and traded various cryptocurrencies “extensively” -- 67,000 individual transactions -- with multiple digital assets that didn’t trade on Quadriga. That account was subject to substantial fees and generated substantial losses.

Cotten also used an offshore exchange, of which 21,501 Bitcoin were deposited into an account in Cotten’s name. Ernst & Young’s investigation suggests that at least some of that Bitcoin came from Quadriga, though it’s unclear exactly how much. The report said it appears Cotten liquidated all but 8 Bitcoin from that account over the course of three years, for the equivalent of $80 million.