Return of the Bloc: Separatist party could take third in election

Talk of independence is largely hushed in Quebec these days, yet the federal separatist party is rising from the abyss and could soon hold sway in Canada once again.

Just a year ago, the Bloc Quebecois was trying to recover from an internal feud that split its lawmakers and left it leaderless. Polls now suggest the tide has turned. The Bloc is on track to win the most seats in a decade, making it a potential powerbroker in parliament assuming the two largest parties fail to win a majority in the Oct. 21 national elections.

“Anybody who talked about the end of the Bloc Quebecois after the last two elections -- it was premature,” said Sebastien Dallaire, a pollster at Ipsos in Montreal. “They are very much alive and kicking right now.”

Leader Yves-Francois Blanchet, 54, who managed a rock singer before entering politics, is aiming for at least 20 seats in Ottawa to defend the French-speaking province’s interests, double the tally from the 2015 election. Projections compiled by the Canadian Broadcasting Corp. as of Oct. 9 suggest the party is on track to take 21 districts, third-most among all parties.

With the polls showing that either Prime Minister Justin Trudeau’s Liberals or Andrew Scheer’s Conservatives are likely to end up with a minority government in the 338-seat House of Commons, 20 or so seats could be enough to wring concessions in exchange for the Bloc’s support.

Though the Bloc has backed the Conservatives in the past, Blanchet hasn’t committed to helping any particular party, and will consider each bill through the lens of Canada’s second-most populous province.

While the Bloc has no aspirations to form government -- it only runs candidates in Quebec’s 78 ridings -- and has put separatism on the back burner, its campaign platform touches a host of hot-button issues. It favors taxing digital giants such as Facebook Inc. and Amazon.com Inc.; giving Quebec powers to reject projects under federal jurisdiction like pipelines or airports; and, perhaps most controversially, opposes any attempt by Ottawa to challenge a recent Quebec law barring teachers and other government workers from wearing religious symbols.

The party’s focus on secularism and the environment, along with the plunge in support for the New Democratic Party in Quebec, have given a boost to Blanchet in his first campaign, and may bring the Bloc closer to the 50 or more seats it traditionally held until 2011.

The party can be hard to place on the Canadian political spectrum. Its values and social policies are more aligned with the Liberals on a classic left-right scale, but its separatist aspirations bring it closer to the Conservatives’ decentralized approach to federalism, said Andre Lecours, a professor in the School of Political Studies at the University of Ottawa. 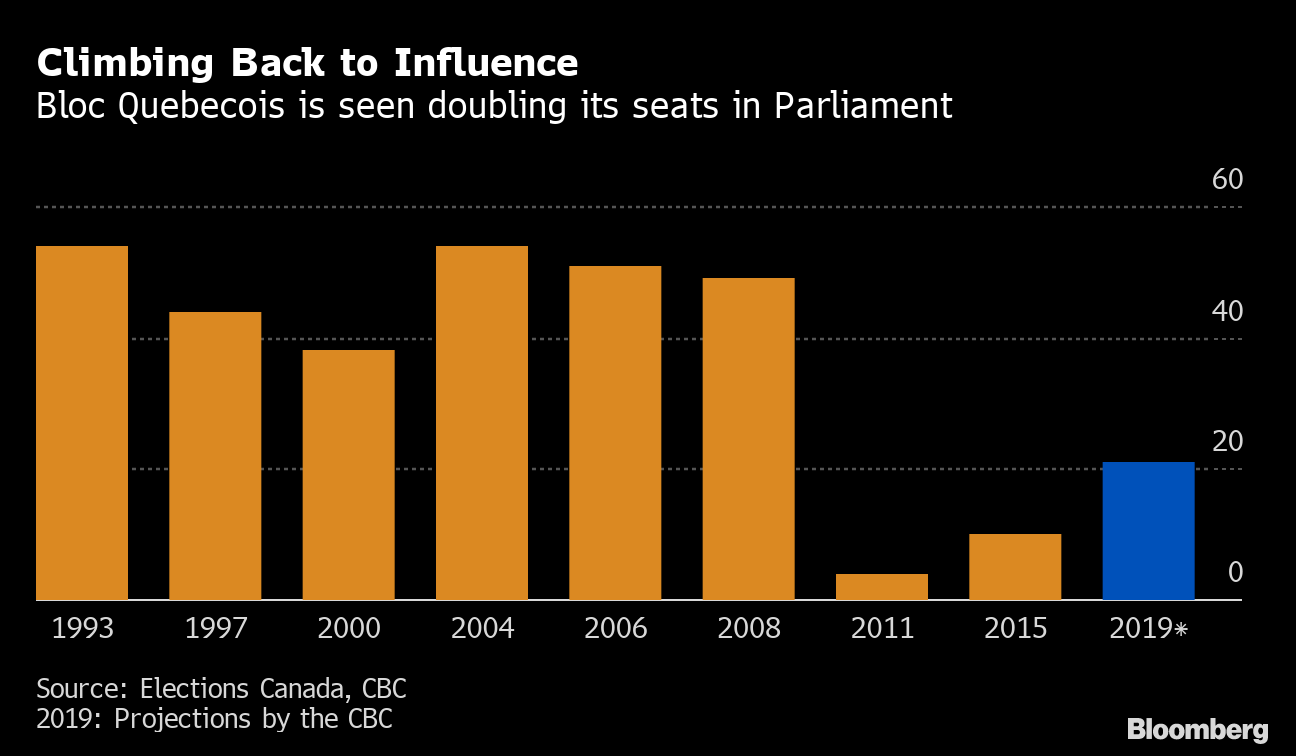 The Bloc was the occasional ally of minority Conservative governments from 2006 to 2011 under Prime Minister Stephen Harper, pushing for policies such as stimulus spending. Lucien Bouchard, who founded the party in 1991, was a cabinet minister for Conservative leader Brian Mulroney.

Rising environmental concerns could complicate cooperation with the pro-pipeline and anti-carbon tax Conservatives. The Bloc wants to end fossil-fuel subsidies, crank up targets to reduce Canada’s carbon emissions, and devised a “green equalization” system of payments to provinces that would tax higher-carbon emitters.

“In the 2000s, the Bloc’s focus was on federalism,” Lecours said. “Now that would perhaps be more complex. If the Conservatives said ‘We’ll leave Quebec alone but we will build a pipeline from Alberta to the Pacific Ocean,’ I’m not sure how the Bloc would react.”

While ideologically close, the Bloc is a separate organization from the provincial Parti Quebecois. Both have struggled of late, as separatist aspirations that led to the referendums of 1980 and 1995 have become muted. The PQ was dealt one of the worst results in its history in last year’s provincial elections. In the federal realm, seven of the Bloc’s 10 lawmakers left the caucus in a clash with former leader Martine Ouellet.

Blanchet looks like he’s well-suited for the battles ahead. He started his political career in the PQ and later worked as a commentator for CBC’s French-language news channel before becoming Bloc leader in January. In the Oct. 2 French debate, he took a professorial tone, his language skills giving him an advantage over anglophone Scheer and NDP Leader Jagmeet Singh.

Professorial wasn’t always the best description of Blanchet, whose short temper once earned him the nickname “goon.”

“I have to say, everyone around me, my partner in particular, told me ‘Careful, careful, careful, if they sting you, you may lose it a little,”’ he said when asked about his calmer demeanor. “Wisdom is kicking in.”