Canada’s six-biggest banks are poised to set aside $8.9 billion (US$6.4 billion) for souring loans in the fiscal second quarter -- a record amount that will wipe out more than half the industry’s profits.

The total is the average estimate of five analysts who attempted to calculate potential loan losses through a fog of uncertainty caused by the coronavirus pandemic and plunging oil prices.

The total is three times higher than the first quarter and will be the key reason Canada’s biggest banks will see profits plunge in the period ended April 30.

The six large lenders are expected to post a 44 per cent earnings decline for the second quarter, the median of estimates compiled by Bloomberg Intelligence. That would be the biggest drop in 11 years, when banks were sideswiped by a global financial crisis.

“It’s going to be bad -- they’re going to be taking big allocations and provisions,” Craig Basinger, chief investment officer for Richardson GMP, said in an interview. “We’re not overly concerned on that side, but we just think the negative news is going to probably keep weighing them down in the near term.”

Government relief efforts and measures by banks such as mortgage deferrals and lower credit-card interest rates may just be delaying the reckoning: the mortgage reprieve, for example, kicked in in late March and was good for six months.

A sharp spike in reserves, though, would show how worried banks are for Canadian households and businesses as they emerge from the pandemic and into recession. New accounting standards adopted by the industry in late 2017 require banks to forecast the likelihood of good loans going bad.

This quarter’s jump in provisions may be three to four times higher than a year ago and will be mostly for loans that have yet to go bad, according to Bloomberg Intelligence analyst Paul Gulberg.

“Reserves build will span across borders and impact both commercial and retail loans,” Gulberg said in an interview. U.S. bank earnings pointed to elevated provisions over the next two to three years, implying the same possibility for Canada, he said.

Toronto-Dominion Bank already gave a window into how bad things will get -- at least in the U.S., where it has a branch network that stretches from Maine to Florida. Canada’s second-largest lender by assets expects to record about $1.1 billion in loan-loss provisions for its U.S. retail division, according to May 8 disclosures.

The bank also said it will set aside $600 million tied to U.S. credit cards that consist primarily of its retailer partners’ share of provisions, though those are offset and won’t affect earnings.

Equity investors have already made up their minds that things will get ugly. Bank stocks have plunged 25 per cent this year, double the decline in the benchmark S&P/TSX Composite Index.

National Bank of Canada analyst Gabriel Dechaine says investors will likely come back when credit deterioration has peaked. “We believe it is still too early to make that call, and the only way to gain confidence in it is to assess the progress of Canadian economic re-opening,” he said in a May 14 report.

For Cormark Securities analyst Meny Grauman, the main question for investors is whether they should buy the dip -- a strategy that worked well as the economy recovered from the global financial crisis. “The answer to that question is tied to the nature of the Canadian economic recovery, and the bottom line for us is that at this stage the level of uncertainty is very high,” he said. 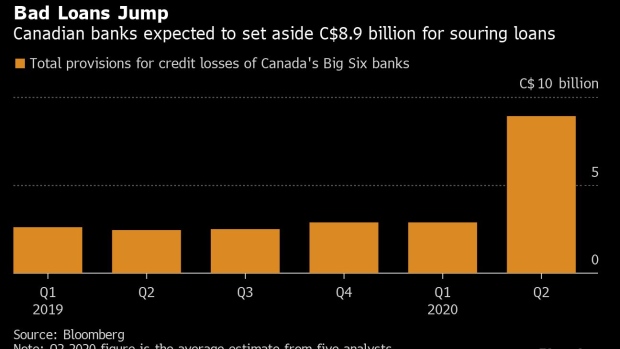 “The banks are in a ‘damned if they do, damned if they don’t’ position,” Young said in a May 12 note. “Report PCLs and allowances that are too low and the market will be skeptical and will likely assume that more hits will come in future quarters. Record sizeable increases and some may wonder what management sees behind the scenes.”

Barclays Plc analyst John Aiken expects Canada’s eight largest publicly traded banks to set aside $14 billion for performing loans that may go sour over the next two quarters, though he doesn’t anticipate that such a “large” number will translate into negative earnings in what he expects to be a “difficult” earnings period for the industry.