Liberals feel they have the chance for a 'smash and grab majority': Nik Nanos on possible election

Early in the pandemic, Justin Trudeau looked like a man under siege. Atop a minority government, hiding behind a scruffy COVID beard, Canada’s prime minister called the military into infected retirement homes as hospitals filled and drug producers threw up their hands over vaccines.

So it’s all the more remarkable these days to see the newly-shaven, freshly-coiffed 49-year-old Trudeau criss-crossing his country with beaming aides, promoting childcare and green energy, ending travel bans and basking in the unexpected fact that a bigger percentage of Canadians are vaccinated than Americans.

Many in the pundit class are shaking their heads but there is growing consensus on one thing: Trudeau will likely call a snap election for September -- and win big. The pandemic has turned into an opportunity for him to slay a very personal dragon: appear less movie star and more ship captain.

“While there might have been some concerns early on, Canada is now at the forefront in terms of getting vaccines implemented and in people’s arms,” Bruce Heyman, a former U.S. Ambassador to Canada, said by phone. “Justin Trudeau would enter this election in a pretty good place from the pandemic, the economy, geopolitically.” 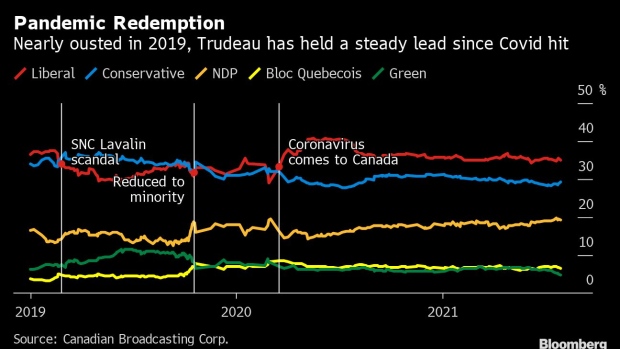 Canadian politics can seem like a tame sport, an arena for policy wonks in a nation that embraces common sense. In truth, there are sharp regional divisions, with western libertarians facing down cafe Francophones, all against the glaring backdrop of what’s happening in the U.S. Canada’s parliament is fragmented among five parties; Trudeau’s goal is to win back a solid majority of seats.

A few months ago, as Americans started returning to concerts and ballgames, renewed pandemic lockdowns loomed in Canada, the nascent economic recovery was grinding to a halt and only 3 per cent of the population was fully vaccinated. Canada looked lame.

When vaccines finally poured into Canada this summer, and citizens calmly and dutifully lined up, Trudeau seemed like a shepherd tending to his national flock by comparison to the madness south of the border.

All of which has led to what is seen as an open secret: Trudeau and his team are preparing to trigger an election campaign.

“This summer represents a sweet spot politically for Trudeau,” noted Shachi Kurl, president of the Angus Reid Institute, a nonpartisan polling and research firm based in Vancouver.

This was far from inevitable. In March 2020, as the pandemic swept across the globe, Trudeau was one of the first world leaders to quarantine after wife tested positive. The prime minister put Canada into lockdown from his living room.

He did more than that. Faced with an imminent catastrophe, Trudeau tossed out the prudent fiscal rulebook that had governed Canada’s public finances since a 1990s debt crisis. His government wracked up hundreds of billions in debt to roll out some of the world’s most generous COVID-19 aid programs, with net federal debt expected to balloon to 51.2 per cent of gross domestic product in 2022.

It was a gamble and it paid off, causing a political resuscitation few could have predicted six months earlier. His Liberal Party nearly lost power in the 2019 election after a series of scandals tarnished Trudeau’s carefully curated persona of earnestness and decency.

The son of longtime prime minister Pierre, Trudeau swept into power in 2015 with promises of ushering in a new era in Canadian politics. His vision for the nation inspired enough voters to help his party catapult from third place to a ruling majority.

By 2019, the veneer had worn thin. From an island getaway with the Aga Khan to a corporate bribery case that led him to fire his justice minister, an Indigenous woman, Trudeau’s first term led the parliamentary ethics commission to reprimand him multiple times. Photos of Trudeau as a young man dressed in brown- and blackface also emerged.

Then came the pandemic. Canada’s health care system was already strained as deaths mounted in the spring of 2020, elder-care homes were overwhelmed and it became clear there would be no domestic vaccine production.

“A year ago Trudeau might have been toast -- not only because he is in a minority government, but because we were just beginning to realize how bad things were with COVID, and Canada’s early performance wasn’t great,” said Christopher Sands, director of the Wilson Center’s Canada Institute.

Still, the presence of Donald Trump in the White House made it easy for the prime minister to portray himself as the U.S. president’s moral superior, reaffirming Canadians’ quiet sense of superiority.

The arrival of Biden has created a more complex dynamic. On one hand, relations at the top are improved and, while Canadians like to look down a bit on the U.S., they rely on it and it’s the single most important relationship they have. On the other, Biden has provided more of a contrast to Trudeau than expected -- from both left and the right.

Under pressure from progressive Democrats, Biden has pursued social and environmental policies on Trudeau’s left, which made the Canadian look more like a centrist, pushing him on issues like climate change.

At the same time, from canceling an oil pipeline permit to strengthening Buy American procurement rules, Biden has made it clear that, like Trump, his goal is to advance U.S. priorities and interests, whether or not they hurt the Canadian economy. This has increased Canadians’ sense that they must rely on themselves.

For now, that appears to mean relying on Trudeau.

There are risks in seeking an early election, to be sure. In a political campaign that lasts several weeks, there’s little time to recover from unexpected setbacks. An opposition party that gains momentum can be hard to stop -- as Trudeau’s opponents found out six years ago. Any surge by the left-leaning New Democratic Party could be a particular problem for the Liberals, peeling off younger, progressive voters.

Still, the housing market is buoyant, government spending has proven successful and those who might challenge the prime minister -- especially Conservative Party Leader Erin O’Toole -- are having trouble connecting with voters.

“Instead of gaining traction, that party and that leader are having a bit of an identity crisis,” Kurl, the Angus Reid pollster, said of the Conservatives and O’Toole.

It all adds up to an unexpectedly optimistic political moment for Trudeau.

As John Manley, a former deputy prime minister, put it: “Despite some criticisms, Canadians are giving the government the benefit of the doubt. You’d have to say it looks like an auspicious time to go to the polls.”