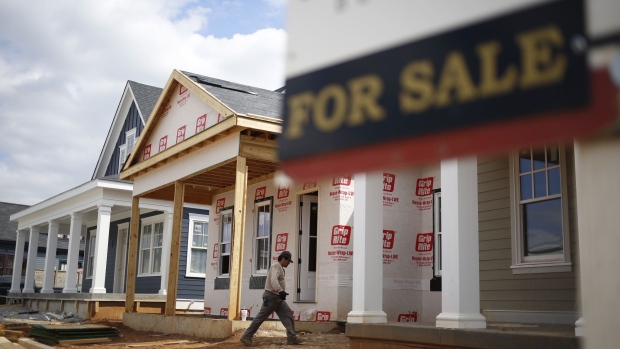 A contractor walks past a "For Sale" sign while working on a home under construction in the Norton Commons subdivision in Louisville, Kentucky, U.S., on Monday, March 23, 2020. Purchases of new U.S. homes in February held close to an almost 13-year high, showing momentum in the residential real estate market before economic activity fell victim to the coronavirus. Photographer: Luke Sharrett/Bloomberg , Bloomberg

Rocket Companies Inc., the parent of the mortgage giant founded by billionaire Dan Gilbert, is now seeking to raise about US$2 billion in an initial public offering after initially targeting as much as US$3.3 billion, according to people familiar with the matter.

The Detroit-based company -- which expects to price its IPO Wednesday -- is set to market a reduced number of shares at about US$18 to US$20 apiece, said the people, who asked to not be identified because the matter isn’t public.

The reduction comes as investors pushed back on the company’s valuation, believing it should be priced as a consumer or financial company rather than a technology business, one of the people said.

Rocket, which operates Quicken Loans and Rocket Mortgage, had earlier filed to sell 150 million shares at US$20 to US$22 each. Terms aren’t finalized and could still change, the people said.

A representative for Rocket didn’t respond to requests for comment.

The downsizing may signal the IPO market’s rebound is straining as the coronavirus pandemic deepens across much of the U.S. Since mid-March, only one major listing -- supermarket chain Albertsons Cos. -- has priced below a marketed range, according to data compiled by Bloomberg.

Companies have raised about US$61 billion through first-time share sales on U.S. exchanges this year, compared with US$50 billion for the same period in 2019, the data shows. That includes a record amount for so-called blank-check companies -- US$24 billion, almost double the volume for all of 2019.

Rocket describes itself as the largest retail mortgage lender in the U.S. Gilbert, who founded Quicken Loans in 1985, will retain 79 per cent of the voting power of the company’s common stock through controlling entities, the filings show.

Gilbert, who was chief executive officer of Quicken Loans until 2002, is also the owner of the National Basketball Association‘s Cleveland Cavaliers. He has a net worth of US$8 billion, according to the Bloomberg Billionaires Index.