Contract closings increased 1.4 per cent from the prior month to an annualized 5.86 million, according to National Association of Realtors data released Thursday. The June pace was in line with the 5.9 million median forecast in a Bloomberg survey of economists. 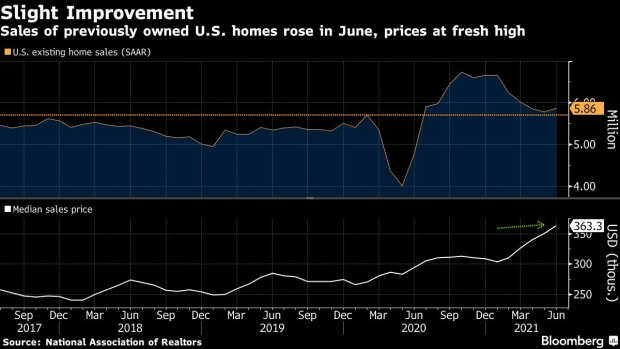 The improvement in sales suggests underlying demand for homes remains robust despite surging prices and still-lean inventory that have curbed sales in recent months. While the number of homes for sale picked up slightly in June, the lack of supply remains an ongoing headwind.

As a result, prices are skyrocketing. The median selling price was up 23.4 per cent from a year earlier to a record US$363,300 last month, reflecting in part increased sales of higher-end properties.

“At a broad level, home prices are in no danger of a decline due to tight inventory conditions, but I do expect prices to appreciate at a slower pace by the end of the year,” Lawrence Yun, NAR’s chief economist, said in a statement.

Builders are grappling with elevated materials costs, supply shortages and hiring challenges. Backlogs continue to grow. Applications to build dropped to an eight-month low in June, and even among the new homes sold in May, construction had yet to even begin on more than a third of them.

There were 1.25 million existing homes for sale last month, the highest since November yet down 18.8 per cent from a year earlier. At the current pace, it would take 2.6 months to sell all the homes on the market. Realtors see anything below five months of supply as a sign of a tight market.

In one clear example of the current housing frenzy, properties remained on the market for just 17 days on average in June, matching the fewest on record. Nearly 90 per cent of the homes sold were on the market for less than a month, the NAR said.