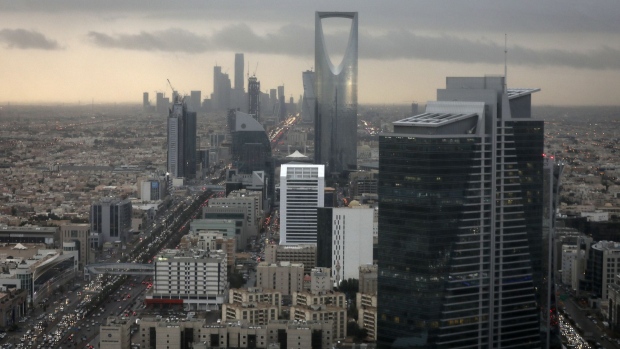 Saudi Arabia transferred 150 billion riyals (US$40 billion) from its central bank to its sovereign wealth fund as it went on an investment spree seeking to take advantage of recent market turmoil.

The transfers from the kingdom’s foreign-currency reserves to its Public Investment Fund were made in March and April on an “exceptional” basis, and will “strengthen the investment capacity of the fund,” Finance Minister Mohammed Al-Jadaan said in a statement published by the official Saudi Press Agency on Friday.

The move comes as the world’s largest crude exporter faces exceptional fiscal pressure from a crash in global oil markets. Al-Jadaan said the central bank transfer contributed to a historic drop in Saudi Arabia’s net foreign assets, which fell at the fastest rate in two decades in March, and will also have an impact on April’s central bank data, expected to be released on Sunday.

“This procedure was taken after comprehensive study and taking into consideration the sufficient level for foreign-currency reserves,” Al-Jadaan said. The PIF has an “important role in diversifying and strengthening economic growth,” he said, noting that the fund’s investment returns “will be available to support public finances if needed.”

A regulatory filing earlier this month showed that the sovereign fund has spent billions of dollars this year buying equities, including stakes in cruise operator Carnival as well as BP Plc, Boeing Co., Citigroup Inc and Facebook Inc.

In his statement on Friday, Al-Jadaan said the fund was capitalizing on “a range of investment opportunities that presented themselves in light of the current circumstances global financial markets are passing through.”

The news of the fund’s buying spree abroad coincided with the government cutting back on spending at home. Al-Jadaan has said that the kingdom will need to trim expenses this year to redirect resources to health care and supporting businesses as the coronavirus pandemic hobbles economic growth.

Earlier this month, the government cut back state worker allowances and announced it will triple a value-added tax, shocking citizens and business owners. Saudi Arabia’s non-oil economy is expected to contract this year for the first time in three decades.