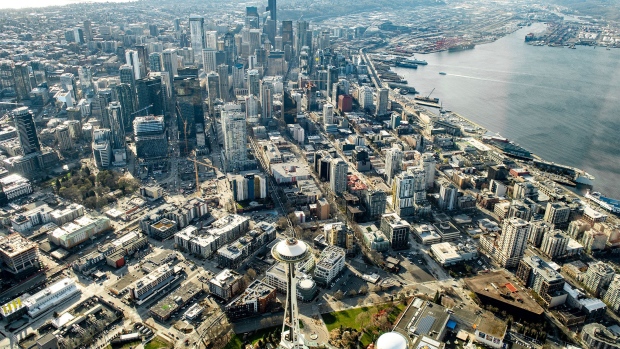 Seattle is poised to get a new US$1 billion development steps from Amazon.com Inc.’s sprawling urban campus as part of a major land sale by the city.

Alexandria Real Estate Equities Inc. agreed to buy the nearly 3-acre Mercer Mega Block from Seattle for US$138.5 million, Mayor Jenny Durkan announced Wednesday, in the largest real estate transaction ever for the local government. The development is slated to include two new office buildings, a community center and an apartment tower with at least 175 affordable units.

The property has been a point of contention in a city that’s struggling with soaring housing costs as a result of its booming tech scene. Activists called on the mayor last year to use the site primarily for affordable homes. Instead, she pushed forward with a plan to sell the land or enter into a long-term ground lease with a private developer, saying the city would benefit more.

“We would have forgone way too many things” by putting just affordable housing on the site, she said in a briefing with reporters, adding that the development will generate jobs and tax revenue. “This was a generational opportunity to take an underutilized city-owned property and to make a real transformational investment.”

Local officials had long seen value in the property, which was assembled in part from land that was left over from reconfiguring Mercer Street, an east-west thoroughfare. Over the years, the city borrowed about US$30 million against the parcel to pay for public transit and homeless services. Proceeds from the sale to Alexandria will repay those debts, and still leave more than US$100 million for other uses, officials said.

Critics -- including Cary Moon, Durkan’s opponent in the 2017 mayoral race -- said last year that the process should have been more open and that selling the land to a private developer would be a poor choice. Located in a dense, walkable area, close to thousands of jobs, the Mercer Mega Block is ideally situated for affordable housing, with a capacity for some 1,300 homes, Moon said in an interview before the city’s announcement. While Seattle would have had to come up with money for such a project, there were plenty of ways to do so, she added.

“We are exacerbating the problem of our city becoming a place for wealthy elites and tech workers and not a broad, inclusive community where everybody gets to be here,” Moon said.

Durkan said she plans to promote her administration’s affordable housing goals with the proceeds. Much of the money will be used to acquire land that could be used for below-market-rate units. The city also plans to invest in programs that help low- and middle-income workers buy homes and finance the building of backyard cottages.

City officials stressed that the development site is getting a significant amount of affordable housing without any public subsidies. The units will be restricted to people making no more than 60 per cent of the area median income, or about US$66,400 for a family of four. The site may also get almost 200 additional units -- some of them with rent restrictions -- depending on how the development plans proceed. Alexandria has also agreed to contribute US$5 million to the city for homeless services, officials said.

For Alexandria, the allure was a rare, large development site in an area that’s become Seattle’s economic engine. The real estate investment trust specializes in building space for life sciences firms and already counts companies including Juno Therapeutics Inc. and Adaptive Biotechnologies Corp. as tenants in its buildings nearby. On Wednesday, Adaptive said it would lease another of Alexandria’s properties for its corporate headquarters.

The Mercer Mega Block is a key part of the the real estate firm’s strategy to more than double its footprint in an area that’s home to some of the world’s most innovative companies, according to Chairman Joel Marcus. “It’s really an irreplaceable location in a core market,” he said, adding that the site’s mixture of offices, housing and a community center “struck a great balance” and is an example of “the future of urban development.”

There’s always a tension in cities when it comes to allocating resources, said Joe Cortright, director of City Observatory, an independent think tank on urban policy. Politically, it can be advantageous to use public land for affordable housing, because it can help kick-start projects that often face significant barriers to development. But in some cases, Cortright said, cities may end up ahead by selling their land and putting the funds to work elsewhere.

“Affordable housing is expensive to build, and you have to maintain it,” he said. “You have to come up with those resources from somewhere.”