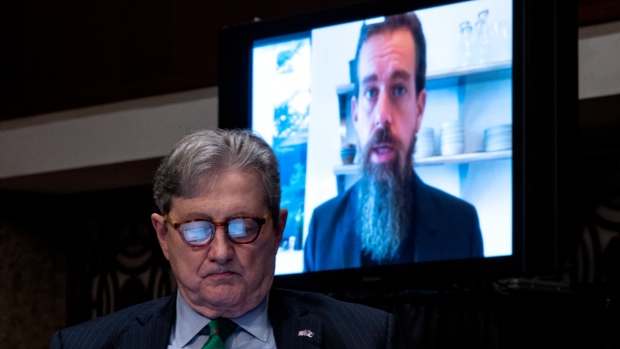 The chief executive officers of Facebook Inc. and Twitter Inc. fielded the latest round of complaints from U.S. senators who remain divided on how to regulate the companies heading into 2021.

Facebook’s Mark Zuckerberg and Twitter’s Jack Dorsey answered questions Tuesday before the Senate Judiciary Committee about content moderation and their role in political discourse for more than four hours, with Republicans reprising their claims that the companies silence conservatives and Democrats revisiting worries about the proliferation of misinformation and hate speech on the platforms.

With a new Congress starting in January and Democratic President-elect Joe Biden entering the White House, senators from both parties called for reining in Section 230 of the Communications Decency Act, which protects the companies from lawsuits over how they police user content. Yet the committee members often espoused goals that were fundamentally opposed, with Republicans wanting more content left up and Democrats wanting more taken down. Both sides worried about stepping on free speech as well.

“Section 230 has to be changed,” said Republican Senator Lindsey Graham of South Carolina, the panel’s outgoing chairman and a close ally of President Donald Trump.

The CEOs responded by pledging to boost the transparency of their operations and Zuckerberg suggested that changes to Section 230, which they prize, should be limited to creating incentives for the kinds of disclosures they are already promising.

Graham endorsed ideas to boost transparency but is planning to move forward a bill that would limit the companies’ ability to moderate political content. He also questioned the companies’ decisions to limit the spread of a recent New York Post article that could have been politically damaging to Biden.

“That to me seems like you’re the ultimate editor,” he said. “If that’s not making an editorial decision I don’t know what would be.”

During several exchanges, as Republicans accused them of squashing debate, the CEOs said companies need to be more transparent in particular about what kinds of posts they remove. Zuckerberg suggested that tech companies should have to meet certain standards for removing content as part of any changes to regulation. Facebook already shares quarterly reports detailing what types of posts it removes, and how many of them were detected using automated software instead of user reports.

The hearing comes in the wake of a contentious election, in which both companies sought to minimize misinformation. Twitter flagged Trump’s posts dozens of times in recent days for breaking rules around false claims and undermining election results, and in some cases the company has hidden his tweets behind warning screens.

Republican Senator John Cornyn of Texas proposed that “the cure for bad speech is not censorship but it’s more speech” -- a philosophy that Zuckerberg has also shared in recent months. Dorsey said Twitter made a “business decision” to set rules that create an environment where people feel comfortable on the site -- a move also aimed at fostering debate.

“What the market told us was that people would not put up with abuse, harassment and misleading information that would cause offline harm and they would leave our service because of it,” he said.

Senator Dianne Feinstein of California, the top Democrat on the committee, suggested the companies should have done more, including removing Trump’s false statements that he won the election and that voting fraud was rampant.

Dorsey responded that he agreed “in spirit” but said Twitter’s policy is focused on providing greater context around misleading information on the election. Zuckerberg said Facebook took “very significant” steps to alert people of the election outcome, including putting a link to its election information center at the top of every U.S. user’s feed.

“We really went quite far in terms of helping to distribute reliable and accurate information about what was going on during this election,” he said.

The hearing is the second in recent weeks for Dorsey and Zuckerberg, who also appeared alongside Alphabet Inc. CEO Sundar Pichai before a separate Senate committee in October to discuss similar topics. Pichai escaped the latest hearing, although the biggest tech CEOs have nonetheless become bipartisan targets in Washington.

Senator Josh Hawley of Missouri, a leading Republican critic of big tech, compared the companies to 19th century industrialists who coordinated their business practices to drive up profits. He alleged the tech companies cooperated on “censorship,” and threatened to subpoena information from an internal Facebook communication system, claiming employees use it to coordinate with Twitter and Google.

“It is time we took action against these modern day robber barons,” Hawley said.

Zuckerberg said Facebook teams coordinate with others in the industry on security, but disputed Hawley’s claim that the joint work amounts to “censorship.” The companies often diverge on content moderation decisions, while cooperating on issues like election integrity. The CEO declined to promise he would search Facebook’s internal communications system for mentions of the other companies, citing those security concerns. He later called the system “basically just a companywide to-do list.”

Despite the divisions, senators said they wanted to push forward on regulating technology companies, and make it the subject of additional hearings.

“There’s one certainty here,” said Senator Richard Blumenthal, a Connecticut Democrat, at the session’s end. “Mr. Zuckerberg and Mr. Dorsey will be back.”