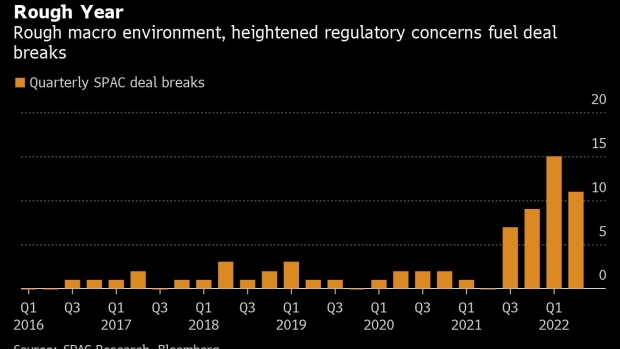 (Bloomberg) -- The SPAC market is reeling as the prospect of a recession and a push from regulators to clamp down on blank-check firms are delivering a one-two punch to an industry that appears to be facing more pain ahead.

Ticketing platform SeatGeek Inc. and UK visual effects company DNEG Plc are among the 26 firms to call off mergers with special-purpose acquisition companies this year amid uncertainty in the broader markets and the industry. The De-SPAC Index, which is comprised of companies that completed their tie-ups, has been cut in half this quarter, bringing losses this year to 65% as it churns at record lows.

In that challenging environment, about 700 SPACs are either on the hunt for deals or racing the clock to close ahead of deadlines that could threaten $183 billion in capital. Meanwhile, heavyweight sponsors are pulling the plug on plans as the industry braces for potential new rules from the US Securities and Exchange Commission that threaten to kill the business.

Here is what’s been happening for the industry that is in the midst of a reckoning:

SPAC tie-ups that were struck when the market was stronger are falling apart, with a record 26 mergers canceled in the first half of the year, according to SPAC Research data analyzed by Bloomberg. Those moves are keeping well-known targets like Forbes Global Media Holdings Inc. and investing app Acorns Grow Inc. private. And sponsors, including teams led by serial dealmaker Betsy Cohen and Victory Park Capital Advisors, are being sent back to the drawing board.

A flurry of completions this year resulted in more than 45 newly public companies that merged with blank checks. However, they have mostly struggled in the public market. The 2022 class of de-SPACs is down by a median 52% this year, according to data compiled by Bloomberg, worse than the 46% loss in the Renaissance IPO ETF and more than double the decline in the S&P 500 Index. Fast Radius Inc., Quanergy Systems Inc., and Mark Cuban-backed Dave Inc. are among the group’s worst performers, with each falling more than 90% since debuting.

Throwing In The Towel

Dealmakers have been rapidly withdrawing and quietly abandoning planned SPACs, with proposed listings that would have raised roughly $30 billion pulled over the last six months, Bloomberg data show. Even Wall Street’s elite has the jitters, with Paul Singer’s Elliott Management Corp. and Ken Moelis bailing on plans to launch new SPACs, while fund management giant Pimco ended its role as a sponsor of one blank check.

A quickly approaching wall of deadlines could impact $183 billion of capital raised by sponsors either searching for targets or working to close already struck deals, SPAC Research data show. Bill Ackman has less than a month to unveil deal plans or risk returning the record-setting $4 billion he raised in a July 2020 IPO. SPACs with teams that count the SPAC King Chamath Palihapitiya, Sam Zell, Howard Lutnick and Egyptian billionaire Nassef Sawiris are among the more than 50 with deadlines by mid-October, according to SPAC Research data.