Poloz's tenure will be remembered for devaluing the loonie: Philip Cross

The Canadian dollar’s outperformance this year stunned many, but strategists are not expecting a repeat in 2020 -- casting doubt on its run as one of the best major currencies.

Just last week, the nation’s central bank cited a tightening labor market as a main reason why it can buck the global easing trend and keep its policy rate at the highest levels among advanced economies. That upbeat tone didn’t last long when November labor force survey showed a surprise job loss, weakening the loonie by its biggest decline since October.

Now, clouds are gathering on the prospects for the Canadian currency, which is in a neck-and-neck race with the British pound for the No. 1 spot among all its major peers this year.

Traders see about a 60 per cent chance of a rate cut in the next 12 months, double what was expected before the jobs data, according to swaps trading. An index from Citigroup Inc. -- which falls when data prove worse than forecast -- is at the lowest since September 2018, indicating that Canada’s growth might be slowing down at a faster pace than analysts expect.

“Canada will be more vulnerable to a local growth slowdown in 2020, to the detriment” of the Canadian dollar, strategists Patrick Locke and Daniel Hui at JPMorgan Chase & Co. said in a recent report. The team expects the currency to weaken and the central bank to cut interest rates in January.

Currency traders will be eyeing the next batch of economic data and Bank of Canada’s policy decision in late January as economic growth turns sluggish.

The central bank may “not sound as confident at its next meetings in January and March, likely preparing for a cut in April,” said Brian Rose, senior economist at UBS Global Wealth Management, which has US$2.5 trillion in invested assets. “Global growth is set to remain weak into the New Year, and Canadian growth is on a downward path,” he said in an email last week.

There are more risks to the Canadian dollar’s strength. Investors are still cautious as Washington and Beijing continue to work toward a phase-one trade agreement that has yet to be signed. U.S. President Donald Trump hasn’t ruled out hiking the tariffs set to take effect on Chinese goods on Dec. 15, with additional levies likely to reduce the appetite for riskier assets, including commodity-linked currencies.

And the outlook for oil prices is still murky. The loonie has benefited from Canada’s oil exports. Yet demand growth is slowing and another big expansion in global production may be ahead. That fear prompted Saudi Arabia to announce deeper production cuts last week as an oversupply crisis could drive international prices back down toward US$50 a barrel.

There are some wild cards too:

• The approval of the USMCA, a free trade agreement between the U.S., Mexico and Canada that is awaiting passage in U.S. congress.

• The ongoing transportation challenges in the Canadian energy sector could impact the petrocurrency.

• A leadership change scheduled at the Bank of Canada after Governor Stephen Poloz announced he won’t seek a second term.

• Elevated household debt has helped to keep the BOC from chasing its peers in cutting rates this year. 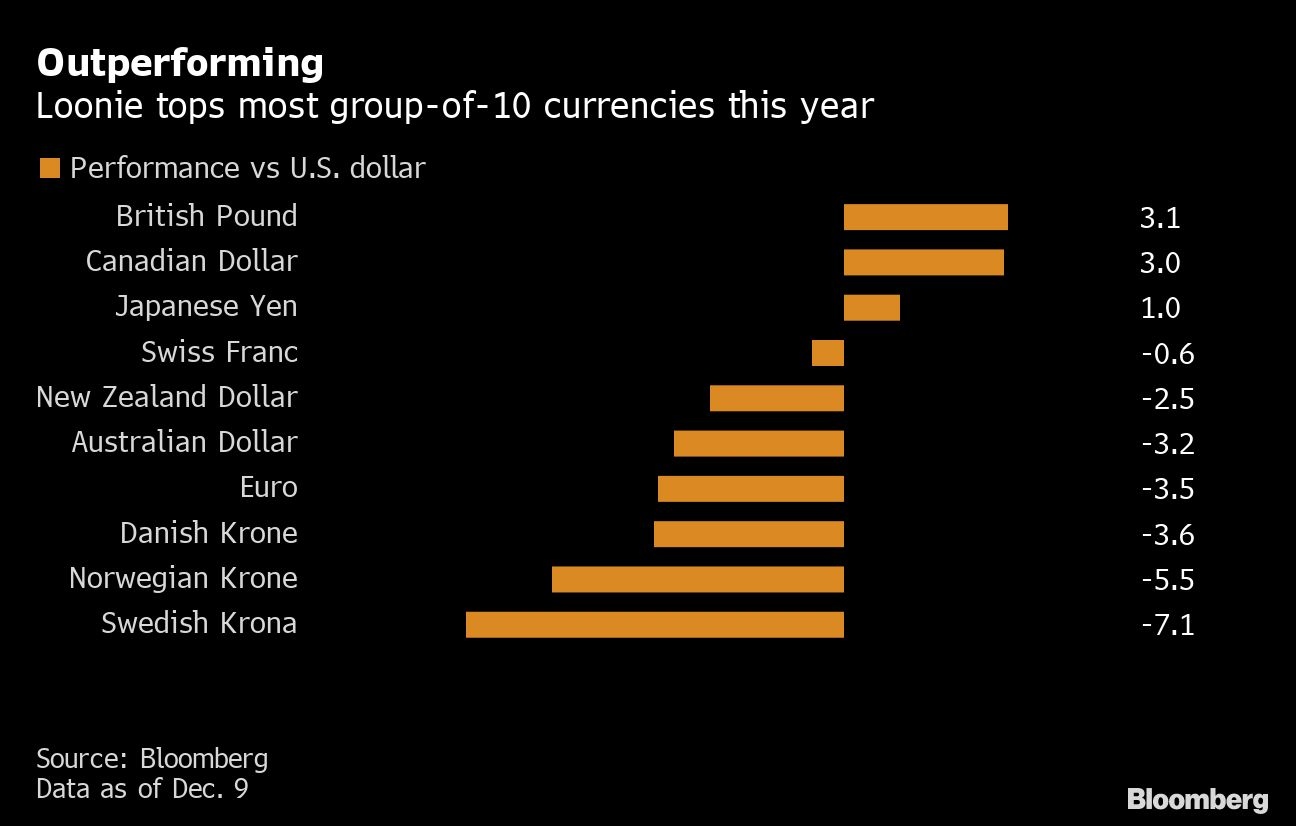 To be sure, bulls say there are many factors that augur well for the currency. Strategists forecast the Canadian currency will strengthen against the greenback by about 1.8 per cent by the end of next year, albeit a smaller rise compared to this year’s three per cent, according to data compiled by Bloomberg.

In a world awash with over US$11.8 trillion in negative-yielding debt, Canada boasts some of the highest yields among Group-of-10 currencies. Its two-year note yields at 1.66 per cent exceed U.S. equivalents by about 5.4 basis points. That’s in part because the nation’s central bank has been reluctant to cut its key interest rate of 1.75 per cent, the highest among G-7 countries.

Foreign investments are also at the highest level since 2015, boosting demand for the currency.

Prime Minister Justin Trudeau’s plans for tax cuts for most Canadians, “should buoy growth” in 2020, Greg Anderson, global head of FX strategy at BMO Capital Markets, wrote in a note to clients. The loonie “would particularly benefit if corporate or payrolls taxes were lowered.” Anderson expects the currency to strengthen against the U.S. dollar to $1.29 by year-end 2020, near the median strategist estimate of $1.30.

Still, with the near-term headwinds facing the currency, UBS’s Rose expects the Canadian dollar’s performance will worsen before it recovers later in 2020. The currency could weaken against the U.S. dollar to $1.34 before rebounding by year-end to $1.29, amid “improvement in global growth and general U.S. dollar weakness,” he said.

“The BOC is cognizant that cutting rates is a double-edged sword likely to cause companies and households to add to an already large pile of debt,” strategists led by Martin Roberge at Canaccord Genuity Capital Markets wrote in a note earlier this month. Roberge expects the central bank to cut rates in the first quarter and the loonie should depreciate.

--With assistance from Laura Cooper.