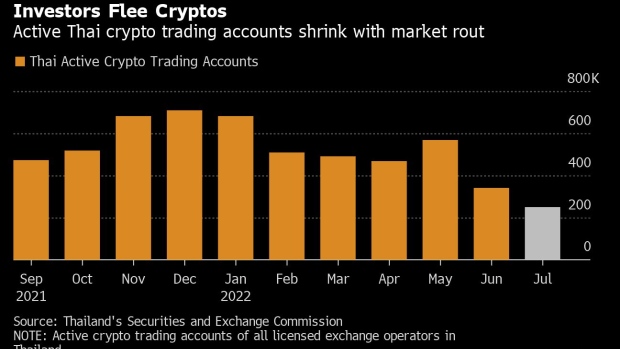 Arkhom Termpittayapaisith, Thailand's finance minister in Bangkok, Thailand, on Monday, Aug. 8, 2022. Thailand’s central bank should stay away from a steep policy tightening path to protect the economy’s nascent recovery while taming the fastest inflation in more than a decade, according to Termpittayapaisith. , Bloomberg

(Bloomberg) -- Thailand plans to overhaul its digital rules to confer more powers on the central bank and tighten the oversight of platforms offering cryptocurrencies and other tokens after a recent market rout left retail investors reeling from losses.

The planned amendments to the regulations will “bring the central bank to be part of it,” Finance Minister Arkhom Termpittayapaisith said in an interview. The Securities & Exchange Commission, which currently has the sole mandate to supervise the industry under the rules passed in 2018, has been asked to take the lead on the overhaul, he said.

The move to tighten the rules comes after Thai authorities were criticized for not acting promptly to protect investors at Zipmex (Thailand) Ltd., a licensed cryptocurrency exchange that briefly suspended coin withdrawals. While the platform has since lifted most of the freeze on transactions, it has has filed for a moratorium in Singapore for protection from creditors against any lawsuits and to buy time for raising funds.

“Right now, the central bank has no room to enter into the regulatory framework except for notifying that cryptos are not a legal means of payment for goods and services,” Arkhom said Monday. “So the framework is not clear enough to regulate the industry.”

Almost $2 trillion has been wiped off the global crypto market since a peak in November last year in an implosion exacerbated by rising interest rates. Leveraged funds and lending platforms blew up along the way, exposing regulatory gaps that officials worldwide are now rushing to plug.

In Thailand, the number of active trading accounts shrank to about 230,000 from a peak of almost 700,000 in December, official data show.

Thailand’s largest crypto exchange, Bitkub Online Co., and its chief executive were fined by the SEC in June for creating “artificial trading volume” on the platform. The company and five officials were also fined for breaching guidelines in listing the company’s own digital coins.

While the Bank of Thailand Governor Sethaput Suthiwartnarueput has said the authority wants to draw “red-lines” on cryptos, it is set to test a central bank digital currency by the end of the year in a pilot project. But it has no plans yet to issue a retail CBDC, it said last week.

Arkhom said tighter crypto regulations will not be aimed at throttling innovation and technology but to ensure investors have greater protection.

“For the stock exchange, you have the paper to prove you are the owners. In the digital world, you have nothing except for the consent that you put at the bottom, which people never read,” Arkhom said. “We are trying to protect investors as well as keeping the players in the industry in the fair terms.”