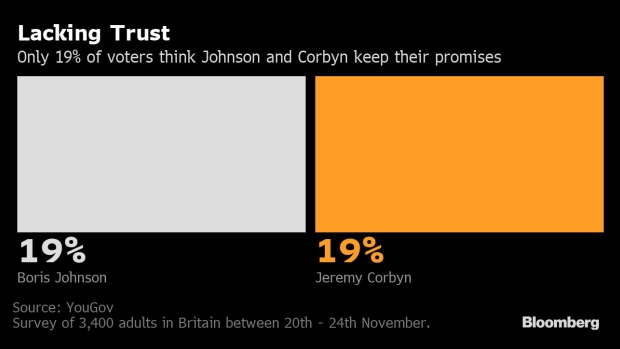 (Bloomberg) -- After a bitter general election campaign in which rival parties have traded accusations of lying and distortion, the U.K. is facing up to the need to overhaul the rules on political campaigns.

Politicians playing fast and loose with the truth is nothing new in elections, but the 2019 edition has seen a proliferation of deceptive tactics that have provoked public dismay.

According to senior British officials, a review of the way social media is used during an election period is now highly likely once Thursday’s contest is over.

Spreading controversial messages to draw attention to an issue was a hallmark of the Vote Leave strategy led by Dominic Cummings that delivered the Brexit vote in 2016. Examples included repeating the disputed claim of sending 350 million pounds ($460 million) to the EU every week, meaning the idea was regularly rebutted and amplified. The approach appears to have been adopted by Boris Johnson in 10 Downing Street, where Cummings has been his chief adviser.

The Conservatives have been accused of using misleading tactics on multiple occasions in this campaign, including:

The public appears to be noticing. When asked in a televised debate on Nov. 19 whether the truth matters in this election, Johnson replied, “I think it does.” The audience laughed. Johnson was also cornered over the Google incident at a question-and-answer session on Monday, repeatedly being asked about the claims. Johnson said he knew nothing about it.

“In my political memory, it’s never been like this,” said Steven Barnett, a professor of communications at the University of Westminster in London. “It’s quite a clever strategy, but it serves to undermine faith in the whole political system. There’s a greater sense of skepticism and cynicism about any of the promises that are made.”

The main opposition Labour Party and pro-EU Liberal Democrats have also been accused of spreading misleading messages in the campaign, including:

One of the government departments responsible for policing elections and social media is the Cabinet office, where Johnson’s fellow Vote Leave campaign veteran, Michael Gove is a senior minister.

Two senior officials, speaking on condition of anonymity because the matter is sensitive, said the authorities would need to review the role disinformation has had in this election campaign, once it is over. That could involve considerations of whether tougher rules are needed, according to one of the officials.

Alongside adopting new tactics on social media, the Tories have also been more confrontational with traditional outlets than in previous elections, echoing the style of U.S. President Donald Trump. Johnson has refused an interview with the BBC’s chief interrogator Andrew Neil, unlike the other major party leaders, instead favoring the use of videos direct to voters through social media.

Johnson also refused to participate in a climate change debate on Channel 4, before threatened to review the channel’s broadcasting license when it replaced him with a melting ice sculpture. Johnson’s colleague Gove tried to get into the debate and then shared a video on social media showing how he was refused entry. The effect was to create a controversy that shifted the focus away from Johnson’s refusal to show up.

--With assistance from Tim Ross.

To contact the editors responsible for this story: Tim Ross at tross54@bloomberg.net, Stuart Biggs, Thomas Penny