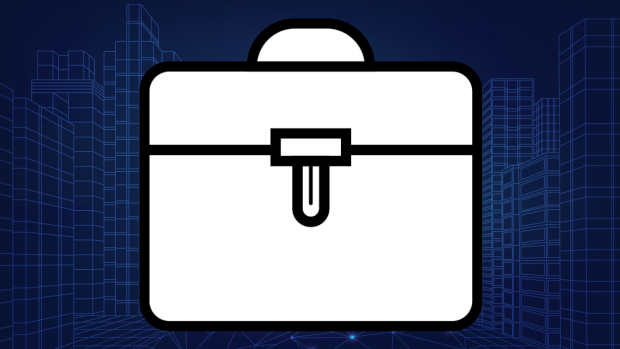 With its “The Future of” series, BNN Bloomberg looks at what is next for our transformed economy and daily lives. , Graphic by BNN Bloomberg

This is one of countless innovative new ways of getting work done that were born out of the pandemic. The automat is an example of technology that can replace several shifts of work, perhaps even a barista position or two, though it requires servicing and regular maintenance. In fact, there are few facets of the way that we approach and perform our work that haven’t been impacted by the pandemic.

While 2020 has served as a test for businesses’ pivoting and survival skills through a crisis, it has also been an inflection point in the way workplaces view automation, diversity and inclusion in Corporate Canada. As companies look to the future, there will be long-lasting effects of this work-from-home and automation experiment, during which women left the workforce in unprecedented numbers and a racial reckoning forced companies to acknowledge systemic racism.

Following a year of human crisis after human crisis, experts say organizations will need to put the lessons from this year of soul-searching into action – and place innovation and diversity as top priorities for 2021 and beyond.

Economist Linda Nazareth, a principal at Relentless Economics who specializes in trends around the future of work, describes what has unfolded in 2020 as “a grand experiment.” According to Nazareth, the days when companies could “coast” are over. Coronavirus-related restrictions, which forced many workplaces to ask their employees to work remotely, have highlighted which companies are good at pivoting, and which ones have limped along under bad management, inadequate processes or weak leadership.

According to Statistics Canada, nearly 40 per cent of workers were doing their jobs remotely at the end of March during the first wave of the pandemic. The vast majority (85 per cent) of those working from home work in finance, insurance or education. The higher an individual’s education and earnings, the more likely you are to be able to work remotely. StatsCan estimates suggest that 22.5 per cent of businesses will continue to have at least 10 per cent of their staff still working from home post-pandemic.

“I suspect this was a sea-change, at least in jobs where there’s a war for talent. I think in a lot of cases, people won’t return to the office. The real test will be next year when jobs have to be filled and companies decide whether they’re going to look locally or all over the country,” Nazareth says. 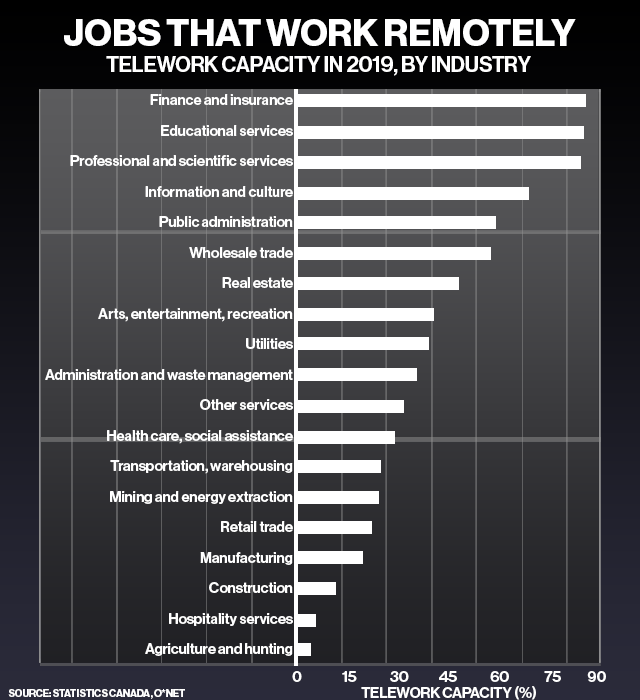 While the work from home trend hasn’t been possible for frontline and service workers, the economic downturn has exacerbated income inequality more markedly than previous recessions. Those who continued to earn incomes during the pandemic and lockdowns have seen their financial prospects improve; yet many of the most vulnerable workers – some who were already living paycheque-to-paycheque before March – have yet to recover financially.

While the seeds of income inequality were sown in the decade following the financial crisis, the legacy of the COVID-19 recession may be an even greater divide between the haves and the have-nots.

“We are looking at some workers being very much in demand and they can choose whether to work in the office or at home. In tech and higher-skill occupations, they can look forward to higher salaries,” Nazareth says.

“But we see a lot who will not have that same bargaining power.”

Growth to be driven by skilled people from around the world reaching their goals in Canada: CIBC CEO

Victor Dodig, president and CEO of CIBC, joins BNN Bloomberg to discuss his business leadership style as the bank continues to navigate through the pandemic. Dodig also speaks to what he believes is needed to stimulate economic growth in Canada.

Meanwhile, with corporations looking to trim costs and many sitting on a cash hoard of an estimated $80 billion, according to a recent report by the Canadian Imperial Bank of Commerce — the result may be a rush to automate.

Pre-pandemic, Canada was on track to lose nearly half of existing jobs to automation within a generation, according to estimates by the Centre for International Governance Innovation (CIGI). In a recent report, CIGI Senior Fellow Joël Blit says there will be an “acceleration” of this trend, describing the scale of automation as a result of the crisis to be “bigger than that of any recent downturn.”

According to Blit, that’s because of the severity of this recession as well as its health-related component, which makes the case for less human contact. He predicts this will affect a broad range of industries beyond retail and manufacturing.

Many of the millions of jobs lost during this downturn may become permanent, which has major ramifications for the labour market. Blit writes that the benefits of automation won’t be “distributed fairly.”

Post-pandemic, he suggests doing away with the wage subsidy, which doesn’t incentivize companies to innovate. Blit also advocates for maintaining and perhaps increasing individual support for workers who face long-term joblessness without re-training.

NO RECOVERY WITHOUT A SHE-COVERY

Another unique feature of this recession is its disproportionate impact on women’s employment, which was at historically high levels before the pandemic hit. Then, in March, women suffered 63 per cent of the job losses. And, months later, Canadian women have not participated in the recovery to the same extent as men.

According to economist Armine Yalnizyan, the COVID-19 health and economic crisis makes clear that the essential economy is reliant on the often ignored “caring economy” – unpaid work caring for children, elders and the sick – done predominantly by women.

This was evidenced by the sharp rebound in employment in September, when children returned to school after many months off. It was driven by women aged 25 to 54, suddenly unburdened by childcare, who returned to the labour force en masse.

Armine Yalnizyan, economist and fellow on the future of workers at the Atkinson Foundation, joins BNN Bloomberg to provide her thoughts on the throne speech and why she believes more urgency is needed behind social and childcare support.

“The future of work absolutely depends on how women are reabsorbed and retained in the labour market in the coming months, and what that means not only for current household income, but what it means for maximizing the learning potential and the earning potential for the next generation,” says Yalnizyan.

In a nod to the importance of childcare for the recovery, the Trudeau government recently announced plans to spend $20 million over five years towards a childcare secretariat to guide federal policy.

A failure to properly support women who have children could result in another round of joblessness during the second wave. Yalnizyan, an Atkinson Fellow on the future of workers, says Canada has been largely shielded from the full economic impact of COVID-19 thus far.

“Between now and March are the critical months in terms of how bad things are going to get,” she says. Yalnizyan adds she fears the cascading effect of businesses shuttering over the winter months, turning layoffs into permanent joblessness, and disproportionately hammering women. By her estimates, this will take a toll on many households, reducing their spending power by 20 to 50 per cent, and deepening the economic rout.

Employers have a big part to play in supporting female employees in 2021, a year that lawyer and HR expert Laura Williams describes as one of “transition.” Legal requirements regarding accommodation, including making special arrangements for parents working from home while caring for young children, are changing rapidly. Williams says she’s never witnessed a situation as fast-moving as this one in her decades of experience.

Williams says managers and leaders in Corporate Canada need to be on the lookout for signs of burnout, especially among parents who have been working long hours on the job as well as long hours on the home front.

“Single moms or other households that may not have much in the way of support available to them will need more flexibility.”

Unemployment during the pandemic has also taken a disproportionate toll on visible minorities. This prompted StatsCan to take the unprecedented step of gathering labour force data by race starting in July, bringing it in line with the U.S. Bureau of Labor Statistics.

Meanwhile, a new societal focus and acknowledgement of the need for more diversity, equity and inclusion came after the killing of George Floyd, an unarmed Black man in the U.S. who died at the hands of police. Corporate Canada joined the fray, with leaders of some the country’s biggest employers publicly stating support for the Black Lives Matter movement and vowing to do more to dismantle systemic racism.

Williams, who is also the founder and principal of Williams HR Law, says the month of May marked a turning point for her firm. Demand for investigations, restorations and proactive programs related to diversity, equity and inclusion have quadrupled since then. She says this journey has led to a “deeper level of understanding” of systemic racism for many Canadian businesses.

The events of 2020 were the catalyst for this collective “awakening” but Williams says she is also optimistic that the “positive changes” that many organizations undertook will carry into 2021.

“A lot of the diversity was at the lower echelons of an organization, the entry-level roles or contract roles that were more temporary than permanent. Conversations have erupted and I don’t think it's going to be a flash in the pan,” she says.

If this year was one of examination and awakening, next year may be categorized by more intense scrutiny of firms that simply maintain the status quo.

“If employers just move the shells around for optics, I think they’re going to be held to account,” she says.

“Down the road there will be significant fallout and lost trust, which is going to further destabilize workplace cultures which have already been ravaged by the pandemic.”