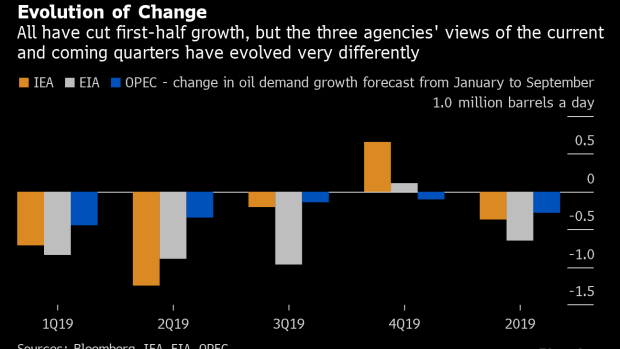 (Bloomberg) -- Right now may be as good as it gets for the OPEC+ mission to shrink global oil inventories. This quarter’s contraction in stockpiles won’t last and next year they’ll start to expand without deeper cuts from the producer group. That’s the consensus view from the three big oil-forecasting agencies.

The International Energy Agency, the U.S. Energy Information Administration and the Organization of Petroleum Exporting Countries all see the biggest oil inventory draws for the year happening right now. The outflows will start to slow from October or, according to the EIA, may reverse if OPEC+ keeps pumping at current rates. Next year things will get even worse, with all three forecasting further stock builds.

Weakening oil demand growth has been the over-riding theme so far this year.

Estimates of incremental demand for the first half of 2019 have been slashed since the start of the year by all three agencies, as data for the major oil-consuming countries have become available. The same is beginning to happen for the current quarter, with the EIA ahead of its peers.

There is little reliable data for the third quarter yet, but the IEA said in its latest monthly report, published earlier today, that “preliminary figures for July point to stronger global demand growth of 1.3m barrels a day year-on-year,” driven by Russia, India and LPG/ethane use in the U.S. The agency sees that growth accelerating in the fourth quarter, aided by crude prices “significantly lower” than last year in the second half of 2019.

This puts the IEA at odds with the other two agencies. While the EIA and OPEC recently have trimmed oil demand growth forecasts for the third and fourth quarters, the IEA has offset further cuts to growth in the first half of the year with a stronger outlook for the second half.

But even as it forecasts stronger oil demand growth in the coming quarter, the IEA also sees a big jump in non-OPEC production, with the U.S. and Norway leading the charge to add 1 million barrels a day to OECD supply between 3Q and 4Q19, and Brazil boosting non-OECD by 130,000 barrels a day. The imminent start of more than 2 million barrels a day of pipeline capacity in the Permian Basin is expected to “spur further growth“ in U.S. production, while in Norway first production from the Johan Sverdrup field has been brought forward to October.

Even if they have diverging views on the strength of global oil demand growth in the coming months, there is at least one thing the three agencies all agree on. The current level of OPEC+ production is too high to keep stocks from building next year. And with the first half of 2020 looking particularly difficult from the producers’ point of view, the data indicate deeper cuts will have to be on the agenda when they meet in December.

To contact the reporter on this story: Julian Lee in London at jlee1627@bloomberg.net

To contact the editors responsible for this story: Alaric Nightingale at anightingal1@bloomberg.net, John Deane, Fred Pals