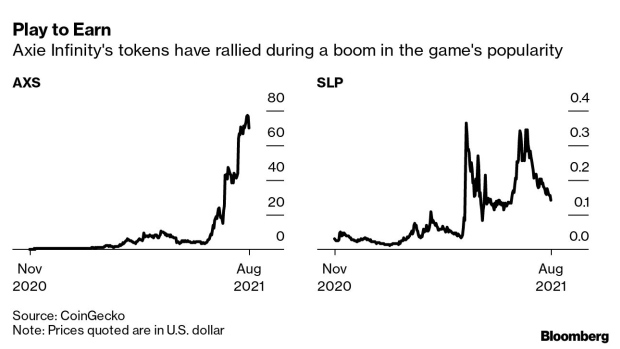 (Bloomberg) -- When Vincent Gallarte was laid off in July, the Manila IT analyst found an unusual financial lifeline: an online game that rewards players in cryptocurrency. In his first two weeks of Pokémon-like questing and battling, Gallarte earned more than 37,000 pesos ($732), three times what he would have made at his “real job.”

Like a lot of newcomers to so-called play-to-earn games, the 25-year-old Gallarte hadn’t had any particular interest in the world of Bitcoin, Ether and other cryptocurrencies. Now he imagines a lucrative side-hustle. “I started playing Axie the same day my employer terminated my contract,” he said. “I’m so grateful.”

Axie Infinity is among the biggest — and most polarizing — of these new games, which allow players to accumulate tradeable crypto coins. To investors like billionaire Mark Cuban and Reddit co-founder Alexis Ohanian, who were part of a $7.5 million funding round for Vietnamese game-maker Sky Mavis in May, it’s a gateway to crypto for people around the world. Others look at the buy-in cost, now more than $600, and the influx of newbies “working” for low-value tokens and see evidence the Axie Infinity model is unsustainable.

Axie Infinity’s daily active users swelled from 30,000 in April this year to more than 1 million in August, with most logging on from developing countries hit hard by Covid, including the Philippines, Brazil and Venezuela. Originally built on the Ethereum blockchain, Axie recorded around $30 million worth of Ether transfers a day over the past month, according to Etherscan. That’s not much in the $2.2 trillion universe of cryptocurrencies, but meaningful for players—and governments—in poorer countries. On Monday, the Philippines’ Department of Finance and the Bureau of Internal Revenue reminded players that their Axie Infinity profits are subject to income tax, local reports said.

Sky Mavis Chief Operating Officer and co-founder Aleksander Leonard Larsen says they take their responsibility seriously, monitoring the in-game currencies and tweaking the market as needed. “Some people say we’re like the Fed,” he said in an interview. “We are ultimately the creators of this universe and are responsible for making sure that it lasts. We are always tracking the economy to make sure it stays at a healthy level.”

In Axie Infinity’s virtual world of Lunacia, players steer colorful, blob-like creatures called Axies to acquire two kinds of coins. Smooth Love Potions (SLP) are awarded for successful battles and can be cashed out or used in the game to breed new Axies. Axie Infinity Shards (AXS) can be earned in seasonal tournaments or for selling Axies in the game’s marketplace. AXS can be cashed out too, but like other governance tokens, they’re designed to function like shares: Sky Mavis says holders will eventually be able to vote on new game features or corporate spending proposals.

Gallarte heard about the game from a cousin. But players need three Axies to get started, at a minimum of around $200 apiece. That was far too much for the newly unemployed Gallarte. He sought out a sponsor, someone who lends his Axies to new players in exchange for a percentage of their in-game takings, sometimes as much as 90%. Anything a player earns with a borrowed Axie accrues to its owner, who is then supposed to wire the player his cut.

Gallarte appealed through Facebook to the Real Deal Guild, a group of Filipinos who now sponsor hundreds of players. They agreed to let him play their creatures for a small haircut: the guild would keep 30% of his earnings.

The boom has been a windfall for Sky Mavis, which takes a cut every time an Axie changes hands and collects a fee when players breed new, non-fungible token creatures. Players have created more than 2 million of the digital monsters, and the Axie trade has generated more than $1 billion in transactions, the first NFT platform to do so, according to CryptoSlam, which tracks NFT marketplaces.Axie Infinity generated just $21 million in revenue for Sky Mavis from its 2018 inception through July 1. Since then, it’s brought in $485 million.

Virtual goods with real-world value have been a staple of gaming for years now. The difference between Axie and most other big in-game markets is that Axie encourages players to cash out and gives them the tools and transparency to do so. Instead of a semi-sanctioned peer-to-peer exchange on an unauthorized third-party marketplace, Axie players can take their SLP and AXS directly to a major crypto exchange and sell for whatever’s on offer. Recent demand from the Philippines was high enough for Binance to offer an SLP-peso trade, as does Manila-based BloomX.

Independent analysts say it’s no mystery why Axie has been a hit in emerging markets. The price of AXS has soared in the past two months, a sharp contrast with the broader economy in the Philippines, where roughly one out of 11 people are still unemployed. (SLP tokens are less valuable and prices have been more volatile this summer.) Access to cryptocurrency also appeals where local currencies are weak or, in Venezuela’s case, in crisis.

But the Axie frenzy has also bred criticism that the platform is propped up by new money drawn to a get-rich-quick premise. Vanessa Cao, founder of venture-capital firm BTX Capital, said the Axie model is “fundamentally unhealthy and unsustainable.” “Players need to spend hundreds of dollars upfront just to play,” she said. “It’s a wrongful concept. You can’t ask people to pay before even having any idea what the game is about.”

Cao offered Dream Card, from BTX portfolio company X World Games, as a counterpoint. It’s free to get started; its almost 560,000 users customize character cards and trade them. X World Games doesn’t give a “misleading impression that Santa Claus is coming to town,” she said.

Would-be Axie players are active on Telegram and Discord, looking for sponsors help them get started. That’s how John Aaron Ramos, a 22-year-old university student in the Philippines, says he connected to a Venezuelan gamer in November, months before the game boomed. At the beginning, he earned up to 300 pesos ($6) a day.

Over the next four months, he bred new Axies and the price of Ether went up, increasing his earnings tenfold. He ended his relationship with his sponsor and built his own stable of contract players, lending Axies to 15 people including friends and relatives. He keeps 30% of their earnings.

In March, he bought two apartments south of Manila for his parents. He also bought insurance plans and is contemplating investing in stocks. “The value of Axie could fall, but I’m not worried,” Ramos said. “I must still have physical assets so that I am in a more secure position.”

Sky Mavis doesn’t regulate the relationships between sponsors and contract players, though in June, the company tweeted to condemn reports that sponsors were soliciting nude photos from female applicants.

“Axie Infinity is a digital nation and, like in any society, certain people might be criminals,” said Larsen. “How do we deal with those who might be abusing other scholars or players? These are challenges for us internally.” The company has banned “several thousand” accounts for violating the game’s terms, he said, including for bot behavior or when there is “clear evidence of scams.”

The company seems more comfortable in the role of central bank. After the price of AXS rose nearly 650% from July to early August, Sky Mavis reduced the price to breed Axies. It cut by half how much users can earn each day on quests and increased the rewards available to better players.

Some of the risks for Axie Infinity players and investors are in line with the rest of the crypto world, where massive drawdowns are common. Cuban himself took a bath in June, when a coin he liked went from around $60 to 0 in a single day. “The investment wasn’t so big I felt the need to dot every I and cross every T,” he told Bloomberg. “I took a flyer and lost.”

If AXS and SLP tank, as predicted by traders taking short positions against the coins, players may not be able to cut their losses. The game only allows them to cash out SLP every 14 days, a constraint that, like all lock-ups, chafes a lot more when asset values are falling. As it is, there’s evidence new players may not fully understand how to protect their gains. Larsen says users seeking customer service help have emailed their crypto wallet passwords to the company.

For evangelists, the learning curve is the point. “It’s going to help digital-asset adoption 100%,” says Lennix Lai, Director of Financial Markets at OKEx, a crypto exchange headquartered in the Seychelles. “Imagine a large group of people who have never had crypto before, who have never had a wallet and they’ve never transferred within the blockchain — here there are actually huge opportunities for crypto education,” Lai said.

Larsen says the game has lasting appeal, whatever happens to the currencies. “We see it as more of a social network than a game,” he said. “People come in because it's such a new opportunity, then they fall in love with the community and the game that we’ve been building over time.”