Based on how Netflix Inc. and Walt Disney Co. are trading, Wall Street is more into “Tiger King” than “The Lion King.”

With the pandemic keeping audiences indoors, streaming video has emerged as the go-to entertainment option, especially as theme parks and movie theaters remain widely closed. As a result, Netflix’s market capitalization has eclipsed that of Disney by an historic degree.

Currently, the platform that made a documentary on big-cat breeding must-see TV has a market value of about US$250 billion, compared with the US$216 billion valuation for the home of Mickey Mouse and Simba the lion. According to a Bloomberg analysis, this gap in Netflix’s favour is the highest on record. When expressed as a ratio, the degree to which Netflix is larger is also at an all-time high.

While the two companies have repeatedly flipped back and forth in terms of their size rankings this year, the recent shift has been rapid; Disney’s market cap exceeded Netflix’s as recently as late June. 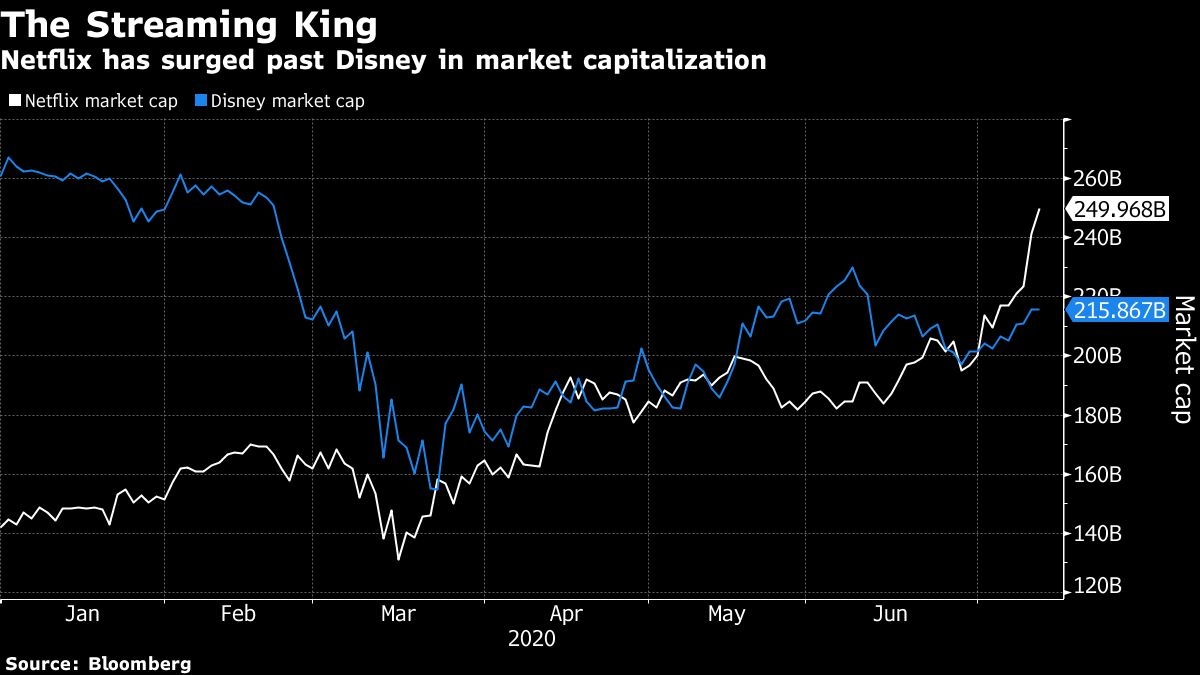 Shares of Netflix are up more than 75 per cent thus far this year, compared with a 17-per-cent decline in Disney. The divergence is almost entirely due to the pandemic, which has pressured Disney across its businesses. Theme parks were shut for months, and the company delayed the release of movies like “Mulan” and “Black Widow.” Earlier, MKM Partners wrote that the outlook for theaters remains “extremely clouded given the uncertainty about when theaters will be able to re-open with new Hollywood content.”

Netflix, meanwhile, is expected to see much higher engagement and subscriber growth when it reports second-quarter results later this week. Analysts have been growing more optimistic about the company. Last week, Goldman Sachs wrote that the pandemic was “accelerating the shift” to streaming content, away from traditional TV, and that the company’s content library and distribution would “serve to steepen Netflix’s growth curve both in the immediate and long term.”

Disney’s own streaming service has been a bright spot over the past few months, particularly with the recent debut of “Hamilton.” However, the company’s Parks, Experiences and Products business is far larger, comprising almost 37 per cent of its 2019 revenue, according to data compiled by Bloomberg.