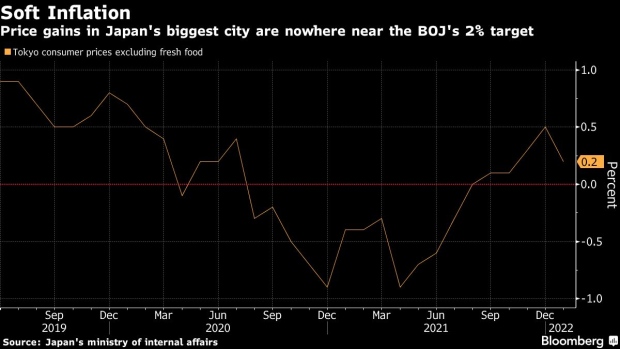 (Bloomberg) -- Momentum in Tokyo inflation weakened in January for the first time since April, as moderating price gains offered support for the Bank of Japan’s stand-pat stance.

Consumer prices in the capital, excluding those for fresh food, rose 0.2%, slowing from December’s 0.5% gain, the ministry of internal affairs reported Friday. Economists had forecast a 0.3% pace for the leading indicator of national price trends.

Inflation slowed largely due to hotel prices, which stagnated compared with the level in 2021, when the end of government-sponsored discounts boosted accommodation costs. Prices of energy rose, but not enough to offset the drag.

The slowdown in Tokyo inflation signals, once again, just how different Japan is from other major economies where surging prices are pushing central banks to rein in pandemic-era stimulus.

While the Federal Reserve this week signaled a March liftoff for interest-rate hikes, Governor Haruhiko Kuroda this month stressed that so-called policy normalization was “absolutely not” on the table for the Bank of Japan.

A summary of BOJ board discussions at this month’s meeting showed multiple members urging that the bank clearly communicate a firm stance on continuing stimulus to achieve its 2% inflation goal.