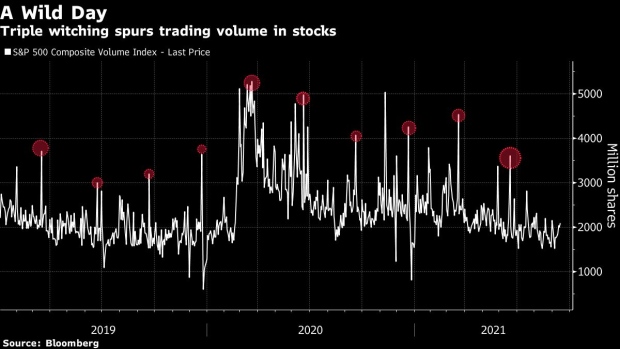 (Bloomberg) -- Like clockwork, the S&P 500 just endured another mid-month swoon before Friday’s options expiration. What’s less certain is whether the market can resume its record-setting rally at a time when traders are busy loading up on hedges.

The expiry of stock and index options this time is part of a quarterly event known as “triple witching,” where futures on indexes also expire. Strategists at Goldman Sachs Group Inc. estimated that roughly $3.4 trillion of equity options are set to mature Friday, including $720 billion of single stock options that is expected to be the most for any September expiration.

Heading into the event, option traders grew antsy about the market, paying near record-high prices for put contracts. Calls for a correction in stocks are multiplying amid the spread of the Covid delta variant, a looming tax hike and the Federal Reserve’s plan to roll back monetary stimulus.

Meanwhile, the S&P 500 has managed to hold above its key trend line -- the 50-day average -- after a stretch of declines earlier this month that’s not been seen since February. The benchmark last closed at 4,473.75.

“We’re still cautious on the coming weeks as all the macro risks/overhangs remain unresolved,” Adam Crisafulli, the founder of Vital Knowledge, wrote in a note. “‘Cautious’ in this case simply means anticipating more of the same choppy, range-bound price action that sees the SPX hold above 4,400 but prevents the tape from setting fresh highs.”

Read more: How ‘OpEx’ Is Shaking Up the Third Week of the Month: QuickTake

The quarterly expiration usually coincides with a rebalancing of benchmarks such as the S&P 500, sparking single-day volumes that rank among the highest of the year. According to an estimate from Howard Silverblatt, senior index analyst at S&P Dow Jones Indices, the rebalance in the index alone could force $55 billion of stock trades.

That means, what’s already a busy week is likely to get even busier. The amount of shares changing hands on exchanges topped 10 billion for four days in a row through Wednesday. That compared with an average of 9 billion shares in the prior month.

With next week’s Fed policy meeting in sight, options traders are zooming in on near-term risk. Over the past two weeks, put options on the S&P 500 with less than one month to maturity accounted for about 15% of the total out-of-the-money put volumes, the most since the height of the coronavirus crisis in 2020, data compiled by Goldman show. Single-stock options have similarly shifted, with 71% of total volumes in short-dated maturities, expiring within two weeks.

Goldman strategists including Rocky Fishman attribute the S&P 500’s recent low volatility to a condition where options dealers are “long gamma,” or going against the prevailing market trend. Typically, options dealers need to hedge their positions by buying or selling the underlying stocks.