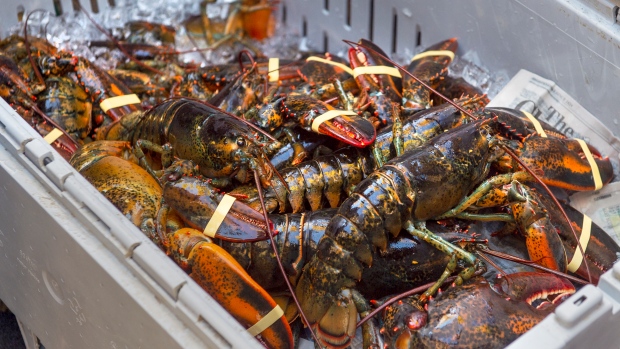 A crate of lobsters sits on the sidewalk as Cheryl Maloney, a member of the Sipekne'katik First Nation, sells lobster outside the legislature in Halifax on Friday, Oct. 16, 2020. , The Canadian Press

HALIFAX - The Indigenous leader at the centre of a simmering dispute over Nova Scotia lobster said Thursday the recent seizure of lobster traps in St. Marys Bay by federal officials could lead to big trouble on the water.

Chief Mike Sack of the Sipekne'katik First Nation says Indigenous fishers whose traps were taken last weekend and on Wednesday will replace them by taking the traps of commercial fishers when the fall season opens Monday in southwestern Nova Scotia - a huge event known as Dumping Day.

“Dumping Day is going to be about 400,000 traps that our people get to pick from to replenish our traps,” Sack said in an interview, referring to the start of Canada's largest and most lucrative lobster fishery.

The seizures by Fisheries Department officers have undermined negotiations with federal officials aimed at establishing a moderate livelihood fishery that will operate outside the federally regulated season, Sack said.

“I have zero respect for them,” Sack said, adding that he had spoken by phone with federal Fisheries Minister Bernadette Jordan earlier in the day. “I told her what I thought and hung up. They need to leave our gear alone; they're infringing on our rights and it isn't going to end here. I called them out for their blatant lies â€¦ The minister doesn't even know what (her) officers are doing and visa-versa.”

About 500 traps were seized on the weekend and another 100 on Wednesday, a federal official said.

Sack said band members had about 300 moderate livelihood traps in the bay on the weekend, in addition to traps used for the Indigenous food, social and ceremonial fishery, which can take place at any time. He said two other Indigenous bands, Bear River and Acadia, have also placed traps in the bay.

The Sipekne'katik First Nation attracted national attention on Sept. 17 when it started a self-regulated lobster fishery on St. Marys Bay, three months before the federally regulated season was scheduled to open. Sack has said First Nations in the Maritimes and Quebec have never given up the right to fish, gather and hunt when and where they want, as spelled out in treaties signed with the Crown in the 1700s.

The Supreme Court of Canada affirmed those treaty rights in a landmark decision in 1999, but the court also said Ottawa retained the right to regulate the fisheries for conservation purposes. In the last three months, several other Indigenous bands in Nova Scotia have started their own self-regulated lobster fishing enterprises.

The non-Indigenous lobster industry has argued that the federal Fisheries Department should shut down those businesses because they are operating outside the federally regulated season and are threatening the conservation of lobster stocks.

A spokesman for federal fisheries officers confirmed Thursday that some of the traps that were recently seized were clearly identified moderate livelihood traps that complied with conservation rules.

Todd Somerville, director of conservation and protection, said the status of the moderate livelihood fishery is still subject to talks with Ottawa, but said that officers consider the fishery to be an unlicensed, unregulated and illegal enterprise under the Fisheries Act.

“It's not our job to authorize or recognize the fishery,” he said in an interview. “At the same time, we don't want to be deliberately disruptive to the negotiation process. We're trying to exercise a bit of due discretion.”

Somerville could not say how many moderate livelihood traps were removed from the bay, saying the focus was on removing untagged traps and gear that did not meet conservation rules. He confirmed that the number of recent removals was much larger than the other seizures made since the self-regulated fishery opened in September.

Fisheries officers will be reaching out to the Indigenous communities to confirm the ownership of the moderate livelihood traps, he said.

“We're very mindful and respectful of their rights and hope that a solution that is consistent with the legislation can be decided upon,” he said. “We're trying to exercise our best judgment in some challenging situations.”