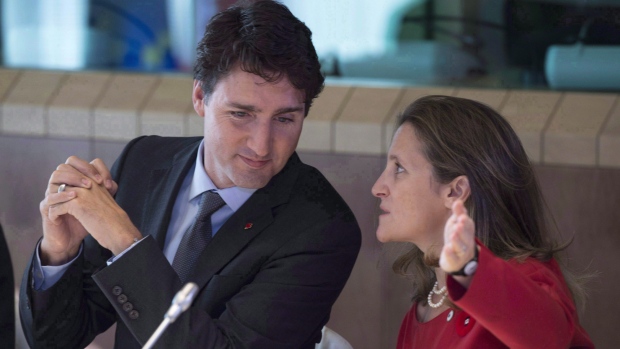 Justin Trudeau will put a new minister in charge of managing relations with the U.S. and China when he unveils his new cabinet Wednesday, according to the Canadian Broadcasting Corp.

The Canadian prime ministerer, who was re-elected to a second term with a weakened mandate last month, will name Francois-Philippe Champagne as foreign minister, the CBC reported Tuesday, citing unnamed sources.

Champagne, who was named trade minister in 2017 before moving to infrastructure last year, would take the reins as the nation’s top diplomat from Chrystia Freeland. She successfully negotiated a new North American free trade agreement with President Donald Trump’s administration and attempted to quell a bitter feud with Beijing stemming from Canada’s arrest of a top Huawei Technologies Co. executive on an American extradition request.

The state broadcaster didn’t say what Freeland’s new position will be on Trudeau’s front bench, though she is expected to help the prime minister quell a growing sense of western alienation. The Liberals failed to elected a single lawmaker in the oil-producing provinces of Saskatchewan and Alberta, where the former journalist was born.

While moving Freeland would represent a substantial shake-up for Trudeau, he’s expected to maintain a sense of continuity by keeping Bill Morneau in place as finance minster, the Globe and Mail newspaper reported last week, also citing unnamed sources.

British Columbia lawmaker Jonathan Wilkinson will become environment minister, the CBC said, and Montreal’s Pablo Rodriguez will take over as government house leader -- a key position in a minority parliament.

The prime minister will unveil the new cabinet lineup Wednesday afternoon at 1:30 p.m. in Ottawa, according to an advisory from the governor general’s office.