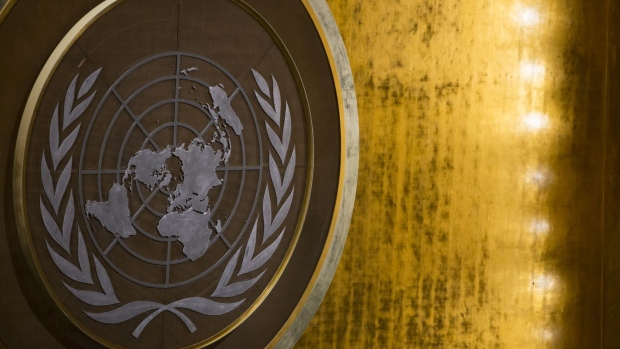 The emblem of the United Nations is seen during the UN General Assembly meeting in New York, U.S., on Wednesday, Sept. 20, 2017. Shinzo Abe, Japan's prime minister, stepped up his rhetoric against North Korea in a speech to the United Nations on Wednesday, saying Kim Jong Un was being allowed to get away with worse behavior than any dictator since the end of the Cold War. Photographer: Caitlin Ochs/Bloomberg , Bloomberg

OTTAWA - Prime Minister Justin Trudeau is calling on countries with the largest land mass to do more to protect the biodiversity of their land and water.

Trudeau made that call today at a special session of the United Nations via video conference on the sidelines of the virtual General Assembly meeting.

Trudeau was taking part in the Leaders Event for Nature and People that also featured the leaders of Costa Rica and Norway.

The prime minister was pledging Canada's support for a UN initiative that aims to protect 30 per cent of land and oceans by 2030.

But Trudeau says that Canada is the only country in the top-10 largest countries by land mass that has joined the initiative.

He says that because of the “sheer acreage” that those countries encompass, more of them need to step up to protect biodiversity.