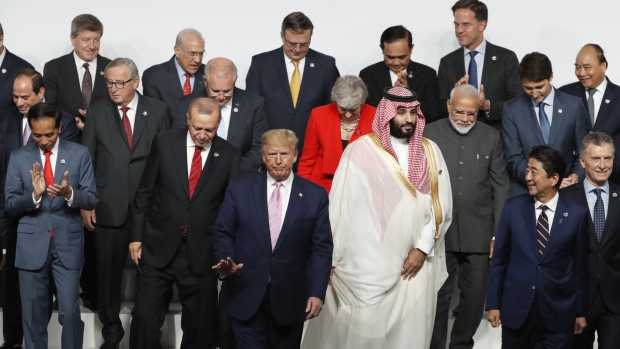 After Donald Trump became president, some of the U.S.’s oldest allies believed they could anticipate his next move. The billionaire’s approach was unorthodox for sure, but there was a certain logic.

Many realize now that their thinking was not only misguided, but that they don’t have much power to influence him. There is also a growing dread that the embattled leader will stop at little in a brutal fight to get re-elected come November. Polls show him badly trailing his Democratic rival Joe Biden.

The geopolitical consequences of any sudden decision in the next four months, from yet another escalation in the conflict with China to more trashing of NATO, could reverberate beyond whoever winds up winning.

From Berlin to Tokyo, officials speaking on condition of anonymity acknowledge a few truths. One is that when it comes to dealing with a president who likes to shock to gain the upper hand, even friends are caught off guard. Another is that trying to stay out of harm’s way is one way to avoid getting targeted, but by no means enough. That flattery works, but will only get you so far.

And perhaps most critically, that multilateralism, as it was conceived in the post-war era with the likes of NATO and the United Nations, has been so compromised that it may never recover.

According to an official close to the leader of one big Group of Seven economy, governments have come to realize that in their dealings with Trump, they can only be reactive. It’s impossible to plan ahead with a leader who behaves in such an erratic way, the person said.

Leaders from the Group of 20 are bracing themselves for the American president to get even more unpredictable. From Trump calling Canada’s Justin Trudeau “two-faced” after a hot-mic incident, to a report he told Germany’s Angela Merkel she was “stupid” during a phone call, the idea that crystalized for many is that anyone is fair game.

While the coronavirus gave some allies an excuse to keep Trump at arm’s length for a few months, his readiness to blame the rest of the world for America’s economic ills, could make them targets in his frenzied campaign.

In the past month, Trump announced his intention to withdraw from the World Health Organization and pull a large number of American troops from Germany, ending an arrangement since World War II.

He is also belligerent with China and the European Union with what officials see as a personal fixation with the U.S.’s trade deficit. 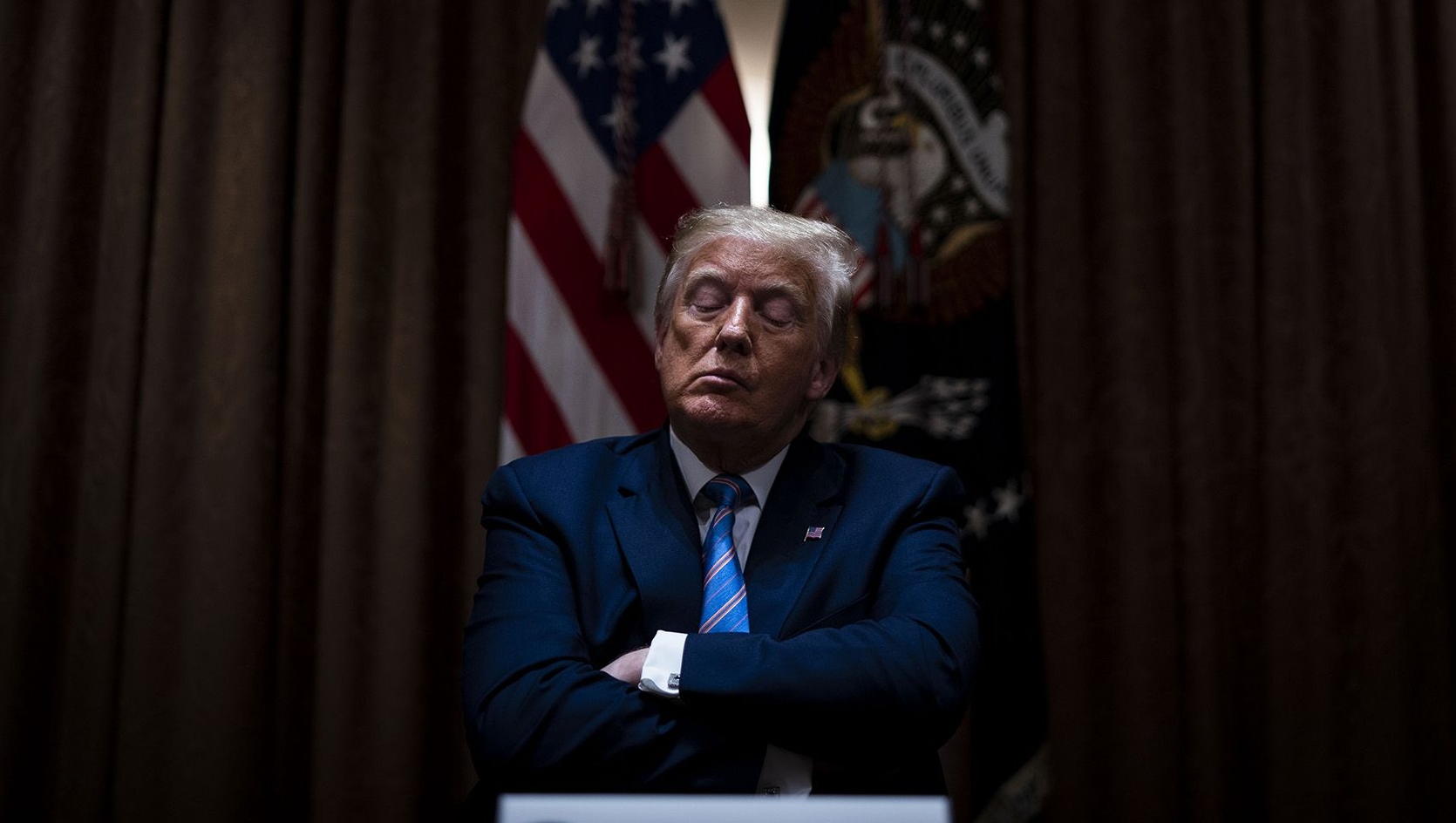 China, with a giant economy to rival the U.S., has its own strategy. Europeans are caught in the middle.

“They want to avoid any provocation from Trump during the election campaign,” said Pierre Vimont, French ambassador to the U.S. from 2007 to 2010. “But even if they remain silent, it’s hard to believe he won’t put things like the European trade imbalance at the heart of his political message, simply because it plays well with his political base.”

Trump’s time in office has tested the ability of many a political veteran to adapt to a new way of doing politics.

Merkel knows that more than most. She’s been a frequent target for Trump’s ire. On a video call in June, when European leaders held a brainstorming discussion about the EU’s next few months, she cited the U.S. election as one of the risk factors, according to an official.

For weeks she has found herself dragged into a debate over his attempts to rearrange a G-7 in person despite COVID-19 running rampant in the U.S. Merkel wasn’t the only one surprised by a May 20 tweet announcing his plan to reschedule for close to the original date, officials say.

Her reluctance to attend was due in part to her unwillingness to help Trump’s campaign. She has since signaled she’s prepared to attend the event, now slated for after the summer, in the spirit of “multilateralism.”

Merkel may be in the firing line but her dilemma is felt across the globe. If the G-7 goes ahead as Trump intends, leaders will be performing a delicate balancing act mere weeks before U.S. elections.

An official close to President Emmanuel Macron said in order to ensure the G-7 doesn’t become a Trump rally, France should try to set the agenda in advance. That smacks of hubris, given how Trump has been a consistent wild card in events he was attending, never mind one where he is a host.

Trump’s conduct at previous international gatherings certainly has diplomats gritting their teeth. At the NATO summit in Brussels in 2017, he hesitated to endorse the military alliance’s sacrosanct clause — an attack against one ally is considered as an attack against all.

At the G-7 meeting in Canada in 2018, he did agree to sign up to an anodyne joint communique only to then renege on it and rage at Trudeau — in two tweets, on a plane out to a summit on North Korea.

Past experiences can sting. Trudeau now tries to keep a low profile on anything that might upset relations with the White House, an official said. Mexico’s Andres Manuel Lopez Obrador flew to Washington to see Trump — but Trudeau politely declined an invitation to join.

The EU has a similar approach, according to an official in Brussels. Even during the election campaign, officials said the aim is to keep channels of conversation open and resist drawing attention to setbacks or give any inkling they might prefer Biden in the White House. Yet on Thursday, tough-talking EU foreign-policy chief Josep Borrell accused the U.S. of laying waste to a multilateral order that he said was essential to tackle global challenges ranging from the coronavirus pandemic to the rise of China.

“The U.S. are destroying all the elements of the multilateral system that was born after the Second World War,” Borrell said during an online panel debate organized by Carnegie Europe. “Multilateralism is a way of balancing the world and putting different powers together in order to share the decision-making process.”

“The alternative is: ‘I am the stronger and I impose my rule.’”

Political observers can see how charged the atmosphere is.

With the U.S. failing to contain the virus and the Black Lives Matter movement gaining momentum, Trump has tried to reignite his flagging campaign.

On July 4, celebrating American independence from English colonial reign, he blamed “the radical left” for threatening the American way of life. There are other targets, too, that complicate the political calculations.

Trump also lashed out at China in the same speech, blaming it for “secrecy, deceptions and cover-up” in its handling of the virus.

As they design strategies for dealing with the U.S., before and after the election, governments are increasingly finding they must do so in tandem with shaping policy on an increasingly assertive Beijing, which has made a bold bid to seize broad control of Hong Kong and defy global condemnation in the process.

That puts the U.K., which controlled Hong Kong until 1997, in a particular bind. It is desperate for Trump to deliver rapidly on a trade deal to burnish its post-Brexit independence and it plans to phase out China’s Huawei Technologies Co. from its 5G networks.

The EU is more reluctant to pick sides. It doesn’t help that the bloc is split between countries like Germany and France, whose leaders are as skeptical of Beijing as they are of Trump.

Italy is the perfect embodiment of that tension. Close to Trump, but ready to dive head first into cooperating with Xi Jinping’s trademark Belt and Road investment and infrastructure program.

“It has not been a good presidency for the alliance system the U.S. built up since World War II,” said David Mulroney, a former Canadian ambassador to China. “China has taken advantage of that and begun to pressure middle powers like Canada and Australia.”

Still, Trump’s time in office hasn’t been difficult for everyone. Populists in power in Hungary and Poland feel a natural affinity to Trump’s “America First” and the chest-thumping. In the EU, there is a shared enemy. Those eastern countries receive a lot of aid from the bloc but defy its rule of law.

Saudi Arabia is grateful Trump declared U.S. support for the kingdom after allegations that Crown Prince Mohammed bin Salman ordered the murder of Saudi critic Jamal Khashoggi. A Saudi official said it was incumbent to maintain a good relationship with the president, whoever it is.

And in South Korea, Trump is seen as being integral to opening up a dialogue with North Korean leader Kim Jong Un. He and South Korea’s President Moon Jae-In “have good chemistry,” said Boo Seung-Chan, former adviser to South Korea’s defense minister. That is a point of view contradicted by former national security adviser John Bolton in his recent memoirs.

For anyone hoping a Biden victory might restore the U.S. to being the world’s global policeman, officials warn that American politics might have changed forever even if Biden would be a well-known entity.