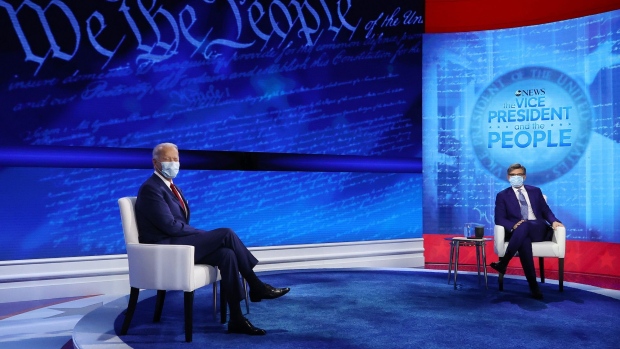 In dueling town halls, President Donald Trump embraced controversial conspiracy theories and sparred with the moderator, while Democrat Joe Biden offered policy-focused answers aimed at avoiding anything that could imperil his lead in the polls

The split-screen campaign event -- simultaneous network town halls 1,000 miles apart -- offered voters a clear distillation of the two candidates for president: Trump appeared defensive and irritable, criticizing the media and Democrats for opposing him at every turn. Biden recited details of 30-year-old legislation and explained his plans in his avuncular long-winded manner.

Trump gave himself rave reviews for his handling of the coronavirus pandemic and discussed topics including the far-right conspiracy theory movement QAnon’s views on pedophilia. At the same time, Biden was faulting his leadership on the pandemic and the economy.

“We saved two million people,” Trump said during his town hall, broadcast on NBC from Miami, referring to his stewardship of the pandemic that has killed more than 217,000 people in the U.S. and left millions infected. Trump also questioned the use of masks to slow the spread of the virus -- a step endorsed by his own Centers for Disease Control and Prevention -- saying people have still fallen ill after wearing them.

Biden, from his town hall televised by ABC from Philadelphia, said Trump failed to take necessary steps to slow the spread of the coronavirus: “It is the presidential responsibility to lead and he didn’t do that.”

Biden said the administration failed to provide enough testing and contact tracing and that businesses and schools need more funding and guidance to reopen and contain the virus.

The concurrent appearances made for one of the stranger moments of the 2020 campaign, fracturing television viewership as the candidates delivered their messages without the added tension and drama of a debate.

Trump’s handling of the pandemic has met with disapproval from an increasing number of voters and has contributed to Biden expanding his lead over the president, polls show. Trump has regularly downplayed the threat posed by the virus, touting an experimental antibody treatment he received while hospitalized for it and saying social-distancing measures advocated by Democrats did more harm than good.

In response to questions, Trump disavowed White supremacy -- after he drew intense criticism for failing to do so in his first debate with Biden on Sept. 29.

But he also defended his retweet of a conspiracy theory that baselessly claimed that SEAL Team Six killed only a body double of Osama bin Laden and that President Barack Obama and Biden, as vice president, had members of the team killed to cover it up. Trump said he was putting the information out for people to make their own decision.

“I do a lot of retweets and frankly because the media is so fake and so corrupt, if I didn’t have social media, I don’t call it Twitter I call it social media, I wouldn’t be able to get the word out,” Trump said.

Asked about QAnon, a conspiracy theory movement, Trump said he couldn’t disavow it because he didn’t know enough about it. “I do know they are very much against pedophilia,” Trump said. “They fight it very hard.”

Trump appeared to confirm reports that he is US$400 million in debt but didn’t specify his creditors. “The amount of money, US$400 million, is a peanut, it’s extremely underlevered,” Trump said. “And it’s levered with normal banks. Normal banks. Not a big deal.”

Biden said that he would contain the virus “by being rational” and pointed to the plan he released to help businesses and schools navigate the new reality. He also disputed Trump’s assertion about the speed of the recovery.

Biden said that he would personally take a coronavirus vaccine if scientists ensured that it is ready and has gone through the appropriate clinical trials. But Biden hedged his answer on whether he would mandate a vaccine nationally once it is developed, saying it would be difficult to require everyone to take it, the same way it’s difficult to mandate masks nationally.

Biden said his pledge to repeal 2017 tax cuts would only apply to the wealthy, and that he would leave the middle class cuts untouched.

Biden also weighed in on the hearings of Supreme Court nominee Amy Coney Barrett on Capitol Hill this week, saying that proceeding with a confirmation before the election is “inconsistent when millions of people have already voted to put someone on the court.”

He again said he’s “not a fan” of a proposal by some liberal groups to expand the number of justices on the high court. But he left the door open to doing so. “I’m open to considering what happens from that point on,” he said, hinting that he would think about changes to the court if Barrett is confirmed.

After Biden’s town hall ended, he lingered for at least an hour to answer questions from the audience.

Trump repeated his claim that he’d protect health coverage for people with pre-existing conditions even though his Justice Department is suing to end Obamacare. “The problem with Obamacare is that it’s not good,” Trump said. “We’d like to terminate it.”

The two candidates originally were supposed to debate Thursday night. Instead of sparring with each other, the town hall format gave the candidates an opportunity to lay out their positions, and engage one-on-one with voters. But they couldn’t answer each other’s statements.

Trump backed out of the originally scheduled town hall format debate after his campaign rejected revised plans by the nonpartisan Commission on Presidential Debates for the candidates to appear remotely because of his infection with COVID-19. The campaign insisted that the president and his aides, a number of whom have also tested positive for coronavirus, posed no health risk. Trump did not say whether he was tested before the Sept. 29 debate in Cleveland.

With 19 days until the election, early voting is already underway in two dozen states. In-person and mail-in voting are surpassing records amid concerns about COVID-19 transmission at polling places and what strategists in both parties say is heightened interest in the race.