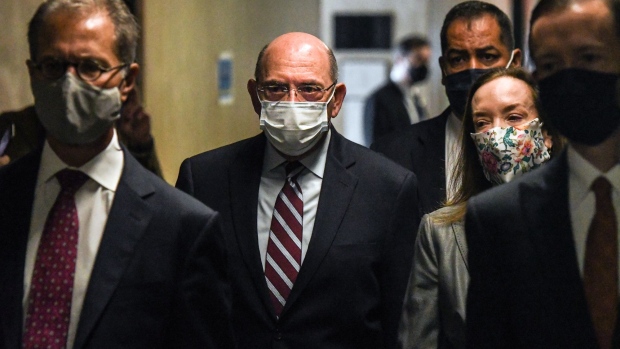 Allen Weisselberg, chief financial officer of Trump Organization Inc., center, walks towards the courtroom at criminal court in New York, U.S., on on Monday, Sept. 20, 2021. Getting Donald Trump's longtime chief financial officer to turn on his boss may prove tough, as Weisselberg's unlikely to get a lengthy sentence even if convicted on tax fraud and other charges. , Bloomberg

Weisselberg and the former president’s company had their first court appearance on Monday since pleading not guilty to the charges in July. Weisselberg lawyer Bryan Skarlatos complained that it was difficult to prepare a defense because the prosecution’s case was a “moving target” that was likely to expand to include other defendants.

“We have strong reason to believe that there are other indictments coming,” Skarlatos said to Manhattan Supreme Court Justice Juan Merchan.

Weisselberg and the Trump Organization engaged in a years-long scheme in which the company helped employees avoid income taxes by paying them in part with unreported perks like luxury housing and cars, according to the indictment announced in July by Manhattan District Attorney Cyrus Vance and New York Attorney General Letitia James.

Skarlatos said prosecutors had an unfair “tactical advantage” because the defense didn’t “know what we’re shooting at” in terms of where Vance’s case was going. The lawyer noted there were six million pages of evidence to review.

Prosecutor Solomon Shinerock pushed back on Skarlato’s complaint about the volume of evidence, noting that the documents shouldn’t be new to his client.

The judge set the next hearing in the case for Jan. 22, 2022, and said lawyers should expect that he’d set a trial date at the time. Merchan had earlier suggested a trial could begin in August or September 2022.

In a statement released during the hearing, Weisselberg lawyers Skarlatos and Mary Mulligan repeated their earlier insistence that their client would fight the charges.

“We have studied the indictment and it is full of unsupported and flawed factual and legal assertions regarding Allen Weisselberg,” the lawyers said. “We look forward to challenging those assertions in court.”