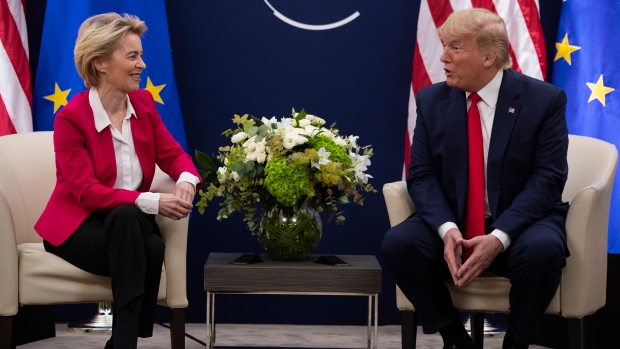 U.S. President Donald Trump is gearing up for trade talks with the European Union and is hopeful the two can reach a “big trade deal,” with the head of the European Commission calling on the sides to draw on their similarities as the process unfolds.

“A deal between ourselves and essentially Europe is something we all want to be able to make,” Trump told reporters in Davos, Switzerland Tuesday. Speaking during a meeting with European Commission President Ursula von der Leyen, he said she is known as a “very tough negotiator, which is bad news for us, because we’re going to talk about a big trade deal.”

The meeting comes as President Emmanuel Macron and Trump agreed Monday to a truce in their dispute over digital taxes that will mean neither France nor the U.S. will impose punitive tariffs this year.

The nations share “a lot of business contacts, friendship, youth exchange, science, culture since way more than 70 years so the American people and the European people are good friends,” she said. “We have issues to discuss and we will negotiate.””

The U.S. and China signed a trade deal on Jan. 15 that foresees an increase in imports of American goods and services by US$200 billion over the next two years, subject to what China described as market conditions. The Asian nation’s pledge to boost imports from the U.S. could end up costing the EU about US$11 billion next year, according to a study by the Kiel Institute for the World Economy, a German think tank.

Germany and France will be particularly hard hit by trade diversions, according to the study’s authors, Sonali Chowdhry and Gabriel Felbermayr. The largest negative effects for the EU are expected in aircrafts, vehicles, industrial and medical machinery, pharmaceuticals, and other agricultural goods.